The first five verses of Genesis form the narrative of the first day of Creation and are therefore a self-contained whole. They describe God's initial creative acts: the formation of the heavens and the earth, the creation of light and the separation of the light from the darkness.[1]

When these verses in the NIV Bible are converted into numbers by the ordinal value system of alphabetic numeration, precisely-cut gems sparkle before us, bearing witnesses to the truth of the words of the text and drawing our attention to the treasure trove of wonders that lies beneath it.

Readers may like to review the short technical page The 'G' Triangles before reading this page.

Numbers are Greek to Me

Why numerate verses in the first place? The late Vernon Jenkins, who led the way in the numerical exegesis of the Hebrew and Greek scriptures, called the numerical reading of texts "a second channel of communication". I recently (June '21) discovered direct confirmation within its opening verses that the 1984 NIV also contains a second, numerical communication, through the encoding of three Greek words related to 'number' or numbering over the five first-day verses. Not only that, but the words align perfectly with those five verses, mapping onto them in a 1-3-1 pattern.

So the man gave names to all the livestock , the birds of the air and all the beasts of the field. But for Adam no suitable helper was found.

These two encodings work together to suggest there are numbers to be found in here, so with this to encourage us, let us proceed.

Here are the 'first-day' verses within the NIV Bible.[2]

The following table shows the ordinal values of each of the five verses, along with the total for the five.

Before we go any further note that the total, 3764, is the concatenation of geometric factors of the standard value of the Greek name for Jesus Christ: Ihsous Christos. This is 2368, or 37 x 64. The factors are a hexagon and a cube, with fascinating connections between them. Readers should go here for further information.

Our universe was created by God to nurture life, and the verses that bookend the five 'first-day' verses, Genesis 1.1 and Genesis 1.5, can both be depicted as a figure that symbolises both life and its Triune Creator. Here is the 12th member of the series of trefoils, with 430 units, which is the ordinal value of Genesis 1.1. 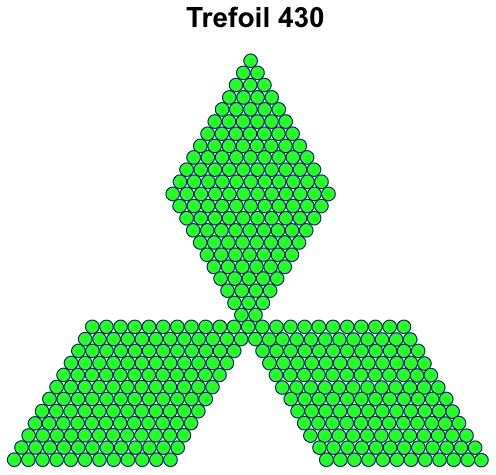 The word 'trefoil' means 'three-leaved plant' and thus the trefoil symbolises life, in this case springing from the soil of God's Word! The trefoil is a well known Christian symbol of the Trinity, often used in church architecture.

Each leaf in the trefoil is a rhombus of 144 (12 x 12) counters. There is further symbolism here, because 12 symbolises perfect government and of course 144 represents God's elect. The first twelve words of Genesis are imprinted wth the name 'Jesus'. 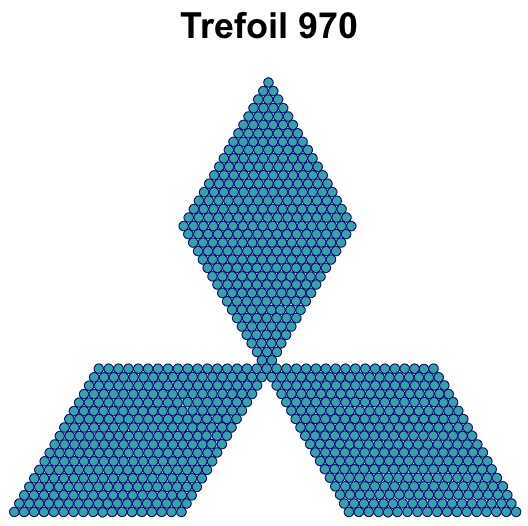 The Trefoils and the 'G' Triangles

Trefoils are cut from triangles, and the triangles upon which the above two trefoils are based, with 595 and 1378 units, are both 'G' triangles. These can generate a hexagram/hexagon pair by self-intersection, a property only one in three triangles have.

The parent figure for trefoil 430 is triangle 595, which also generates hexagram 793/hexagon 397. All four figures are shown below. 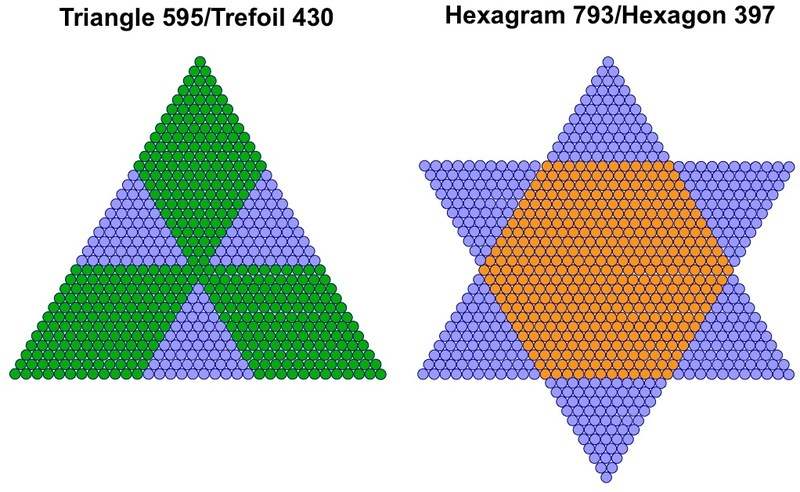 Another remarkable feature of both trefoils is that not only do they imply 'G' triangles but that the trio of smaller triangles that must be removed from the body of the parent 'G' triangles to create the trefoils are themselves 'G' triangles! These are triangle 55 and triangle 136. It did not have to be this way, since only one in every three such trefoils has this property. 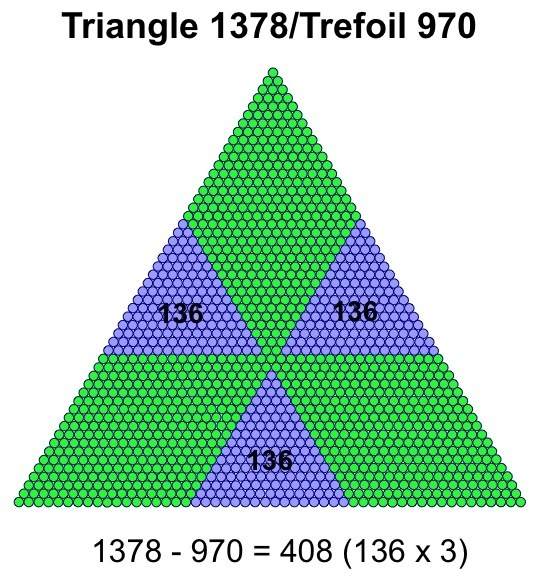 This discovery suggests the idea of trying all possible combinations of the numbers from the 'first day' verses, to see if any further triangles can be found. The numbers can be combined in 31 ways, and another two triangles emerge from these additions:

Incredibly, both of these figures are also 'G' triangles! So three 'G' triangles are direct sums of combinations of the numerical values of the five 'first day' verses of Genesis. This is very unlikely to have happened by chance, because the probability of three of the 31 combined totals being 'G' triangles is about 1 in 600.[3]

The Creation Snowflake and the 'G' Triangles

In The Creation Snowflake I show how the first two verses of Genesis encode a fractal snowflake and its major structural properties. The full snowflake, with 1279 counters, is the ordinal value of Genesis 1.2.

This snowflake, found as it is within the Creation narrative, therefore symbolises God's creation of the universe of manifest forms (which has fractal properties, something which was unknown outside a tiny elite of mathematicians when the NIV Bible was translated and the snowflake was thereby encoded). It is formed in the third step of the infinite process by which a triangle is converted into the Koch snowflake.[4] The first step of this process creates a Star of David.[5]

The triangle which is the starting point for the generatation of snowflake 1279 has 2278 counters and is yet another 'G' triangle. 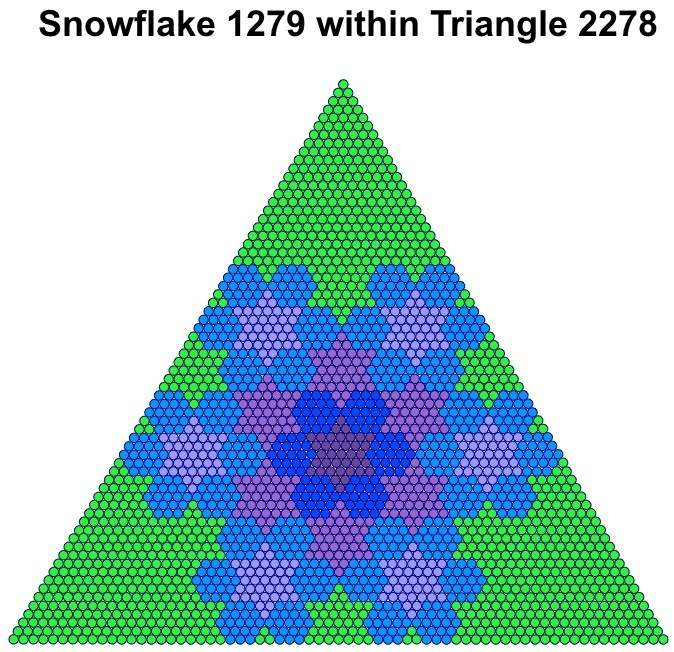 Summarising the First Day of Creation

The narrative linking the NIV Bible's first five verses, their numerical and geometric properties and the spectacular encoding of three Greek words meaning 'number', suggest that there is something very special about these verses.

From a consideration of the verse ordinal values alone, we find among the first five verses of Genesis a huge over-representation of one figure and its derivatives, the 'G' triangle, so-called because it generates the Star of David by self-intersection. The Star of David is an ancient symbol of Christ and a fundamental element of the New Bible Code, as recorded elsewhere on this site. The generative process can be continued with some 'G' triangles to create fractal snowflakes, an example of which carpets the NIV Bible's second verse.

As we have seen above, the 'G' triangles can also generate a series of trefoils which symbolise life, the purpose of Creation itself. It is beautifully appropriate, then, that two such trefoils should be found growing in this fertile soil, bookending the "first-day" creation verses.

The phenomenon is depicted below. 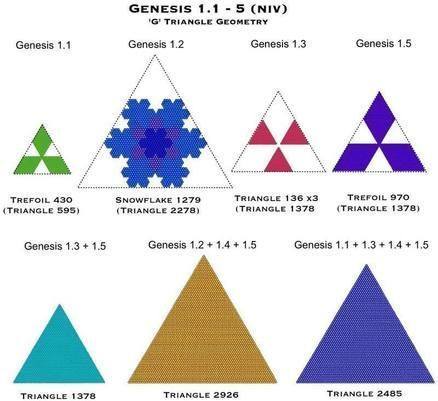 The rest of the pages under the titles The Genesis Watermark and The Garden will show why the 'first-day' verses have been highlighted in this spectacular manner.

1. The Genesis prologue informed our forefathers of ancient events that science has only recently caught up with. The order of creation described in the Bible's first chapter agrees in broad outline with modern theories of cosmogony and evolution. This is all the more remarkable when we realise that only 100 years ago most cosmologists thought that the universe had existed for ever.

3. There are 31 different combinations of the 5 verse totals and a pool of 3764 numbers to choose from. 3764 encompases the first 28 'G' triangles. By the binomial formula the odds against this happening by chance are 1 in 604.

4. Technically, snowflake 1279 is a Koch anti-snowflake, which is formed inside a Koch snowflake. It can also be created beginning with a hexagon.

5. Similarly, the trefoil is the first stage in the creation of an anti-snowflake beginning with a triangle. So the trefoil and the hexagram are related figures.