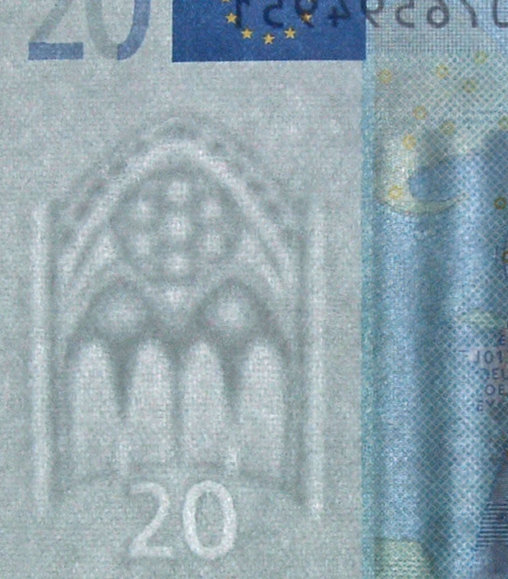 The Genesis Watermark is the name I have given to a suite of numbers encoded within the first five verses of Genesis in the NIV Bible (1984, 2011). These numbers act like a watermark on a banknote, imprinted upon the text as a sign of authenticity and approval - one could say they are the divine imprimatur for this version of God's Word. Like a watermark, the imprint is faint, but when examined under the proper light the image it forms can clearly be seen. In fact, the Genesis Watermark is more like a multi-channel hologram than a simple two dimensional image, as it consists of many imprints superimposed upon the same few lines of text.

This page introduces the Genesis Watermark and shows why it has to be a genuine phenomenon, rather than a random collection of numbers. The pages that follow this one show the Watermark - or at least what I have discovered of it to date - in detail.

The watermark is found by reading the text as numbers rather than letters and summing these to form numerical values for words, sentences and portions of text. This is possible because, in a manner similar to Roman numerals, each letter can be replaced by a number, in this case its positional value in the alphabet. So A = 1, B = 2, C = 3, . . . Z = 26. These numbers are then summed to give what is termed the ordinal value for a word or portion of text. So, for example

The numbers obtained by this method take on meaning under a second system of alphabetic numeration, which I call the standard value system. This is the English equivalent of the well-documented Hebrew system of alphabetic numeration, and goes as follows: A to I = 1 to 9, J to R = 10 to 90 and S to Z = 100 to 800. Also, the numbers can have geometric or other mathematical properties, a further means of conveying information. The two systems of numeration are tabulated below.

This two-stage decoding process is unique to the New Bible code and was given to me in a miraculous way as the key to unlocking the information contained in the NIV Bible. In fact, the entire process was guided by an unseen hand, which (literally) handed me the NIV Bible for decoding and pointed out the exact location of the watermark.

An example will make the efficacy of this system stunningly clear, and also afford you a first glimpse of a tiny part the watermark.

The first twelve words of the NIV Bible are as follows:

In the beginning God created the heavens and the earth. Now the . . .

This is the standard value of the name sacred to all Christians:

All this information can be summarised in a table, which is the method I will use throughout to display the watermark.

So the two-system method has already borne fruit, giving us the name 'Jesus' within the first twelve words of the NIV Bible! I'd like to point out a few details here, so you can appreciate the full significance of this and other findings.

Firstly, where better to place this number? The Bible is the world's best-selling and most influential book, claiming to be God's revelation to man. The NIV Bible itself is now the most popular English translation (it now outsells the KJV Bible), and English is the international language of choice. These are the first, and arguably the most important, words in scripture, a breathtaking statement of our beginnings. If God wished to place His mark somewhere, then this would be the book, version, language and precise location for it!

Next, who better to begin with? Jesus Christ is the Second Person of the Triune God. The Bible itself is the epic story of our troubled relationship with God, and our final reconciliation with Him through the work of atonement performed by Jesus.

On a more technical level, this little word string contains twelve words and in the Bible the number twelve signifies perfect government, which is why there were twelve tribes of Israel and why Jesus had twelve disciples.

Finally, this is the sum of the first twelve words, not twelve words buried somewhere in the middle of a chapter. Finding a desired number within the text is not particularly difficult. The odds of hitting a particular number by chance as you move along a word string are only about 1 in 50, about the same as drawing a named card from a randomly shuffled pack. But if we miss the number we seek as we sum from word 1, we can start again from word 2, then from word 3, etc. In fact, we would expect to find 515 somewhere within the first few verses. But finding such a significant number on the first shot is a different matter. Finding 'hot' numbers that begin books, chapters and verses, or are the ordinal values of entire verses, is always less likely than finding them in obscure word strings. Yet these are regular features of the watermark.

"One swallow does not a summer make", of course, and this is far from overwhelming evidence of design. But this is not the only evidence we are presented with, merely the first tiny chink of it.

I would now like to show you the first real piece of evidence I have for a watermark in the NIV Bible. I call it the Signature of Christ.

'Messiah' and 'Word' are two of the most often used synonyms for 'Jesus' in the English language (the Word is introduced in the gospel of John). 'Yehoshua' is the Hebrew word for Jesus.

The probability of these numbers appearing here by chance, although difficult to estimate with any accuracy, is much less than 1 in 45 this time. I'd estimate no better than 1 in 10,000 and probably much less likely than that.

They are persuasive evidence for design, characterised as they are by pattern and structure, with no untidy overlaps, no gaps and no transgression of word boundaries. They divide the first 24 words of Genesis into four substrings of six words each - no chance arrangement is this! There are six individual signatures too, forming three pairs: Jesus/Yehoshua, Messiah/Messiah, Word/Word). The featuring of the number six here surely reflects the six days of Creation, the subject of this opening chapter. On the sixth day God created man and the signatures are all of Jesus, the Messiah, the Word made flesh.

Why are these numbers different from any random group of four numbers? Because the words are meaningfully related to each other and to the text within which they appear. On any list of names for the Son of God, 'Jesus' would be first and 'Word' and 'Messiah' would be very near the top of that list. Exclude meaning and it collapses into a heap of unrelated numbers, include meaning and structures built from those meaningful relationships spring into view. If a hologram is the best analogy for this phenomenon then the images this and the other pages display are a cathedral viewed from various angles, replete with frescoed walls, magnificent arches and exquisite ornamentation. But before you explore within, you may like to see who created it.

The first 24 words of the text contain the Signature of Christ. If we now compact these words into a string of letters, then from it create a matrix with 29 letters to each row, another wonder is revealed.

The Author of this miracle - for miracle it most surely is - has identified Himself in a supremely elegant encoding, using a method independent of the numeration scheme above. Note that the last letter of CODE is also the last letter of the 24th word, which is where the Signature of Christ ends! Also, each of the four six-word segments contains a letter of the word CODE, as shown in the final table.

Therefore although independent of each other, the two encodings are perfectly integrated, simultaneously displaying the Encoder's breathtaking virtuosity and removing any doubt from our minds that this is a real phenomenon.