The Book of Genesis chronicles the lives of Adam and his descendants, beginning with the creation of Adam in chapter 2 and ending with the death of Joseph in the book’s final chapter. For the particular genealogical line ending with Joseph we are told the lifespan of each male, which usually includes their age at the birth of their first son and either the years they lived afterwards or their total lifespan. Consequently, an unbroken genealogical record exists stretching from Adam to Joseph.

The genealogical line includes Noah, who survived the Flood by building an ark on the instructions of God, Abraham, the first of the three Patriarchs, who led his people to the land of Canaan on the instructions of God, and Joseph, the dreamer, who was sent to Egypt by his brothers, became a powerful man there and later called his family down from Canaan to save them from the seven-year famine. One great theme runs through the lives of these three men: they lead God’s people through an important transitional period in their history. For Noah it was survival of the Flood, for Abraham emigration to a new land and for Joseph escape from a great famine. These facts have some bearing on what is to follow.

Having dug out encoded numbers from biblical lists in Numbers, Ezra/Nehemiah and other books, I have long suspected that the genealogical list in Genesis could also be profitably mined. Initially I concentrated on Genesis 5 and 11, where most of the lifespans were found, finding tantalising but incomplete glimpses of a hidden code. However, I was unaware that this genealogical list actually threaded its way through the rest of Genesis. On discovering the rest of the list I was quickly able to find the treasure within.

The genealogical list from Adam to Joseph is tabulated below. Each row represents the biblical location of each piece of genealogical information, this location given in the left-hand column. The second column from the left shows the place value of selected verses - only those of interest here are shown. The next column gives the names of each male in the generational line from Adam to Joseph, the three columns after it (A, B and C) showing the details of their lifespans - this three-column layout is based on the biblical format. The right-hand column shows the running totals of all the numbers in the three columns, with the numbers of interst emboldened.

Genealogical Table From Adam To Joseph 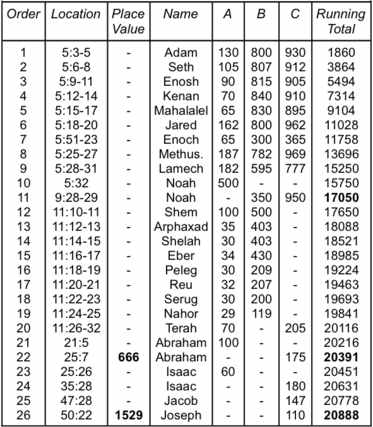 Eight notable features of this list are discussed below. Note that there are other points of interest, but their discussion would obscure the more important features I want to communicate.

1. Genesis 9:28 states that this is the years Noah lived after the flood, rather than after the birth of his first son. This is the only time that the father’s age when his oldest son is born is not directly stated. I have added the number written in the Bible rather than calculating Noah’s age at his son’s birth, as past experience has shown me that the biblical number is always the one to be used.

4. The running total at row 22 is 20391, the first of a pair of numbers which are highly meaningful in English, Hebrew and Greek gematria:

If this encoding is genuine then the digit 2 in the number 20391 must also refer to the Second Coming.

6. The grand total in row 26 (a number associated with YHVH/'the LORD' and 'God') is 20888. Taking the last three digits, as before, we obtain a number that restates the first message:

7. Genesis 50:22 is the Bible’s 1529th verse. This number is not as immediately compelling as 666. However, it assuredly points us in the same dir

Completing the confluence of elevens found in the list, 1529 is also a multiple of 11.

In addition, the highest prime factor of 20888 is a number surely confirming that this is no random collection of lifespans but one that was carefully designed to reveal the Word of God to us.

8. There is a correspondance between the encoded numbers and the narrative within Genesis, through the three focal points of these encodings, rows 11, 22 and 26. In row 11 we find Noah, who built the ark that preserved a remnant of God’s people and earth’s flora and fauna. In row 22 we find Abraham, the first of the three Patriarchs, who led his people to Canaan. In row 26 we find Joseph, who called his family down to Egypt and saved them from the famine. These people created the definitive events in the Genesis narrative.

The numbers 391 and 888 in particular could almost be called the New Bible Code in miniature, as they embody its essential message:

a) They are the numerical values of the Hebrew and Greek words for Jesus and of the English phrases ‘Second Coming’ and ‘The Lord’s Second Coming’, which perfectly summarise the message of the code. [1]

c) They feature in the multilayered encodings revealed in In The Beginning and The Signature Of Christ.

d) They form a cross embedded into the chapters of the Bible, as described in The Sign of the Cross. This marks the site of a major 9/11 prophecy.

The confluence of names associated with the transitional periods in Genesis, significant chapter place values and encoded numbers surely makes the authenticity of these encodings beyond reasonable doubt. They also reveal the significance of the Second Coming itself, as another great period of transition, which this time will be the salvation of not just a few middle eastern tribes, but of all of God’s people.

1. 888 is also the standard value of ‘The New Bible Code’. This was assuredly not by my own design!