The New Testament is headed by four Gospels that tell us almost everything we know of the life and ministry of Jesus Christ. The first three of these books—Matthew, Mark and Luke—are known as the synoptic Gospels, because they give very similar accounts of Jesus’ life (it is thought that Matthew and Luke may have used Mark’s book as a source for their own accounts). The Gospel of John, however, has its own distinctive style and content and consequently stands apart from the synoptic Gospels.

The fundamental distinction between John and the other three Gospels appears to be highlighted by the encoding of two triangular numbers, one the sum of the ordinal values of the opening verses the synoptic Gospels, the other the sum of the ordinal values of all four opening verses [1]. A study of the structural properties of these numbers reveals numerical and geometric links to the subject of all four Gospels: Jesus Christ.

The first verses of the three synoptic Gospels are as follows:

The ordinal values of these verses is as follows:

The sum of these ordinal values is 2080:

The number 2080 is the 64th triangular number, as illustrated below. 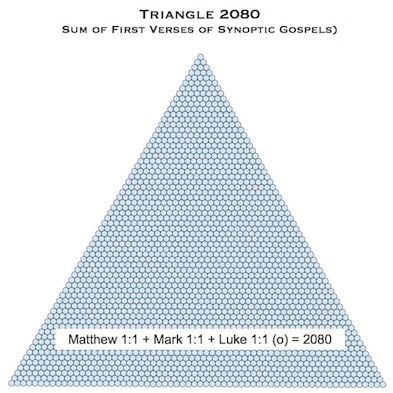 This is a fairly unlikely event: the chance of 2080 being triangular is 1 in 64 and the chances of it having any significant figurate properties, whilst higher, is still fairly low. Moreover, the triangle is a potent symbol of the divine, embodying the concept of the Trinity. Finally, 64 is the ordinal value of one of the less-used spellings of the name of Jesus (Yehoshua) in Hebrew. [2]

Adding the first verse of John to the synoptic verses we can find the ordinal values of all four Gospels.

Amazingly, 2775 is also a triangular number, the 74th member of the sequence! Again, relatively few numbers of this magnitude have any notable geometric properties. Its triangular form is illustrated below, with triangle 2080, representing the synoptic Gospels, superimposed. The remainder, a trapezium, represents the fourth Gospel. The trapezium extends and completes the figure, just as John is an extension and completion of the Gospels. 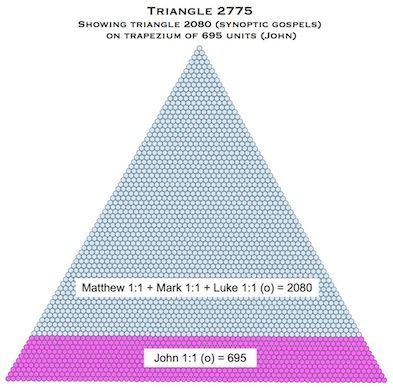 The number 74 happens to be very strongly linked with the name and person of Jesus through gematria!

So 74, the index and base of triangle 2775, is the ordinal value of the English name of the man whose life, mission, death and resurrection are recorded in the four Gospels. As I have indicated, words strongly associated with Jesus seem also to have been stamped with the number. The triangularity of 2775 again reflects the Christian concept of the Trinity, which was no doubt the intention.

The indexes of both triangles, 64 and 74, are related to each other and to the value of Jesus Christ in Greek, 2368, in another triangular setting, this time in classic plane geometry. 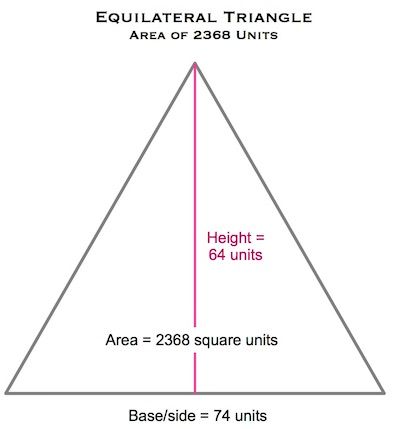 So the two numerical triangles encoded in the first verses of the four gospels provide the base and height for an equilateral outline triangle that links Jesus' name in English (74), Hebrew (64) and Greek (2368). Time and again we see biblical gematria embodying fundamental geometry, particularly the geometry of the triangle and cube, which embody the perfect number three and therefore echo the Triune God, who created these miraculous links between word, number and form.

To see 2368 and its direct equivalents in Hebrew (754) and English (925) together in the vesica piscis, and much more, please see here.

Both numerical triangles featured so far have further features of interest for us, to which we will now turn.

From Triangle To Trapezium

Two out of every three triangular numbers are divisible by 3. 2775 is such a number and division of 2775 by 3 gives 925. This is the standard value of the name ‘Jesus Christ’!

This leads us to a natural trisection of triangle 2775 and a third geometric form for 925, better known as a diamond and a pentagon. The form this time is a regular trapezium. 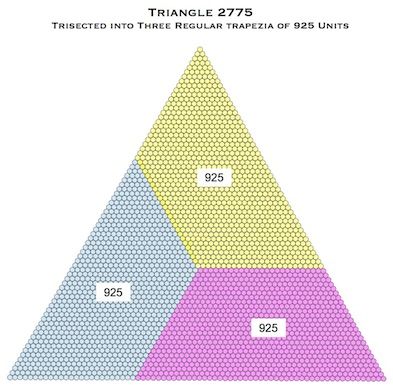 The three trapezia are identical in every respect and show that the number 925 is very naturally derived from the second Gospel triangle.

I recently discovered (10/18) that triangle 2080 holds an incredible secret. Hexagram/hexagon pairs can be created by self-intersection of G-triangles (every third triangle - 2080 itself is a G-triangle, in fact, and self-intersects to form hexagram 2773). Another kind of triangle can be created from regularly-spaced units, known as a centred triangle. Centred triangular numbers have already been found encoded in the English names of the Trinity. 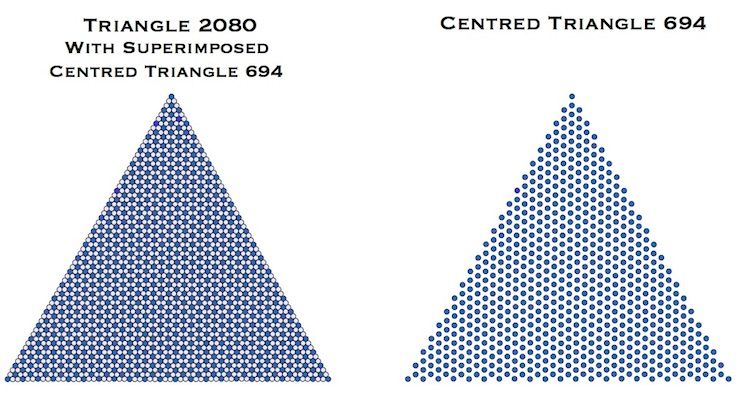 All centred triangles can self intersect to form hexagram/hexagon pairs, which I will call 'stars' here, to differentiate them from the usual kind of hexagram. Centred triangle 694 self-intersects to generate star 925, which means that the Lord is represented here by a Star of David! 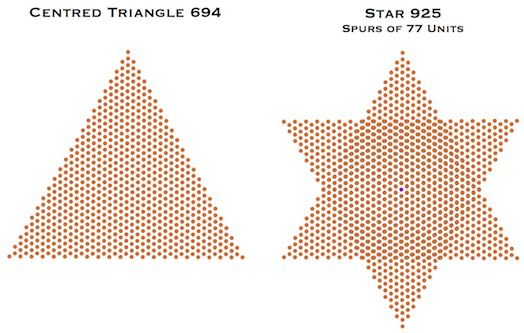 Centred triangle 694 is the standard value of 'Our Redeemer'. Therefore we have the following pair of geometrically-supported identities:

Each spur on the star requires 77 units, the ordinal value of 'Christ'.

Finally, if we twist star 925 thirty degrees to the right and pack its individual counters more densely, we can fit it snuggly into triangle 2080! 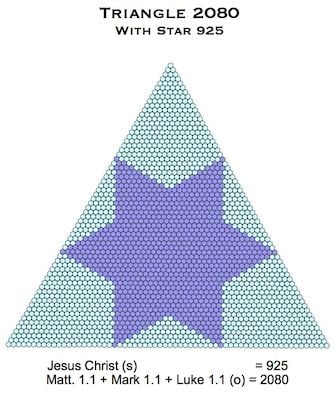 Both 'gospel triangles', then - triangle 2775 and triangle 2080 - can be linked to the name 'Jesus Christ', through its standard value of 925 in English gematria. Since Jesus is the very subject of the gospels these triangles span, it is difficult to see how this beautiful, subtle, masterpiece of biblical encryption and meaningful geometric transformation could be anything other than intelligent design. In fact it forms a kind of seal on the Gospels, as it has been encoded across all four of them.

I just discovered that if we start with trefoil 73 (= the Second Coming (r)) and run two iterations of the Koch antisnowflake iterative process, we create a 'third-order' trefoil that can also be fitted precisely and centrally into triangle 2080. 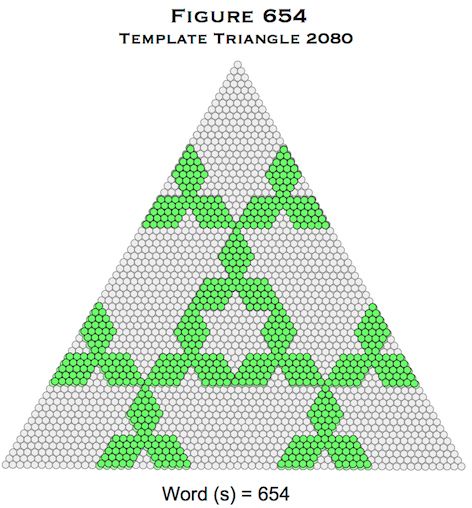 So 'Jesus Christ' and 'Word' come from the same geometric stable. The central hexagram-shaped space is flled by hexagram 73, meaning that 73 is represented here in two geomatric forms. The surrounding hexagonal annulus is based on hexagon 217, which contains the central message of the New Bible Code.

The study of triangular numbers reveals a startling geometric link between the triangular extensions of the numbers 74 and 77, which are the ordinal values of ‘Jesus’ and ‘Christ’. The 77th triangular number is 3003, which, as can be seen below, is the smallest triangle that can completely enclose triangle 2775. 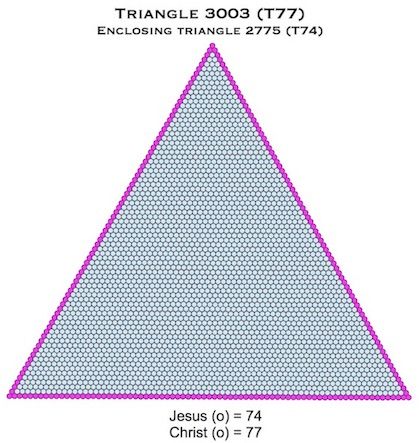 Triangle 3003 can also form a trapezium on which triangle 2775 can sit to yield a larger triangle, the 107th in the series, with 5778 units. Of the first 100 triangular numbers about 4% will create another triangular number when paired in this way. Therefore this phenomenon is statistically improbable. Such an uncommon geometric feature is evidence of prior planning, rather than random action, a hypothesis that is strengthened when we discover that the numbers  74, 77 and 107 are connected not only through numerical geometry but through the name 'Jesus Christ' and two of his most important titles. 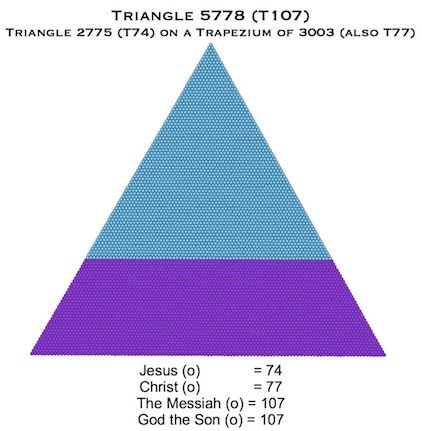 As you can see, these geometric relationships appear to have been built into not only the four gospels but the English language itself, suggesting that the New Bible Code has been a very long time in the planning!

The Gospel triangles are persuasive evidence that the subject of the four gospels, Jesus Christ, is consciously reflected in their opening verses, through the encoding of two carefully chosen triangular numbers. The internal structures of the triangles provide further numbers that, via gematria, have primary links with the name 'Jesus Christ' and his titles. The spellings of name and titles therefore appear to have been guided, so that the analogy between meaning and geometric properties could be made. Note also that Hebrew and Greek names appear to be included in these links. The triangles are therefore further evidence that both the translation of the NIV bible and the evolution of the English, Greek and Hebrew languages have been guided by a divine hand, the same hand that reaches out to us through the gospels.

1.The method of combining the numerical values of verses from widely spaced but otherwise related biblical locations is well-established, having revealed encoded numbers elsewhere in the NIV Bible. For example, see The Sealed Scroll.

2. From The Names Yeshua and Yehoshua, by James Price.