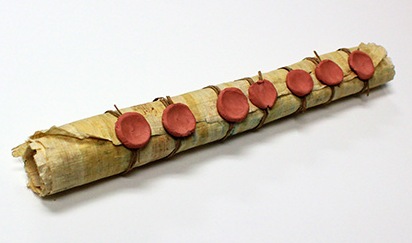 Then I saw in the right hand of him who sat on the throne a scroll with writing on both sides and sealed with seven seals.

John's vision of a scroll "sealed with seven seals" attests to the fact that in olden times important messages were once rolled up into a scroll then sealed with wax. While the wax was still soft it was impressed with the emblem of the sender, such as a royal coat of arms or crest. The emblem identified the sender and an unbroken seal told the recipient that the message had been delivered unread and intact. Although the NIV Bible is a book of over a thousand pages rather than a scroll, it has nevertheless been sealed and stamped in much the same way, so we can be assured of its divine provenance and freedom from human tampering.

For a very short summary of gematria and the two-step decoding process unique to the code, please see The Signature of Christ. A longer introduction to the code is found here.

The seal is revealed when we place together the NIV's opening and closing verses, Genesis 1.1 and Revelation 22.21.

What actually makes this a seal, rather than just the first and last verses of the NIV, is the information encoded within it. This encoded information is equivalent to the emblem stamped on a seal and, as you will see, it similarly identifies the sender of the message.

If the seal is numerated under the ordinal value method, the following result is obtained:

In the New Bible Code, information is encoded as ordinal values and the number obtained is normally the standard value of a meaningfully-related word or phrase. The number 888 has an overwhelmingly meaningful link to these 'alpha' and 'omega' verses. It is the standard value of Ihsous, the Greek word for Jesus, who is referenced by name in the final verse and is the main subject of the message within the 'scroll' that is the NIV Bible.

This, then, is the Royal Emblem discretely imprinted on the seal.

The last nine words of the seal have an ordinal value of 391. This is the standard value of the proper Hebrew name for Jesus.

So the seal is inscribed with the names for Jesus in the languages of the Old and New Testaments.

The New Bible Code is based primarily on modern English words and phrases and we find the English name 'Jesus' encrypted over the first twelve words of the NIV Bible. Next to it is the Hebrew name 'Yehoshua'.

Hebrew, Greek and English are the languages of the Old Testament, New Testament and modern NIV Bible. How appropriate then to find the name 'Jesus' in all three languages found within the first twelve words, last nine words and first and last verses of the NIV Bible! This extraordinary phenomenon is displayed below.

To read the message in a scroll the seal must be broken and so it is with the seal on the NIV Bible. As shown above the last nine words of the seal encode the name of Jesus in Hebrew. By breaking the seal at that point the text is split into two parts which have ordinal values of 497 and 391. The number 391 has meaning in English as well as Hebrew, and the English phrase I found having a standard value of 391 suggested another, which naturally pairs with it to make this breathtaking statement:

The complete statement has a standard value of 888, the same as Ihsous.

Amazingly, the name I have given to the message is itself identified with this same number. [1]

So the emblem of the sender, the essence of the message and the name I happened to give the message are all stamped with the same three visually-arresting digits.

In the Bible the number eight stands for superabundance, resurrection and new beginnings. It is also the first constructable cube (2 x 2 x 2), the cube being a symbol of perfection. As an important element of this divine communication, the number 888 is encoded in other ways within the first few words of the NIV Bible. See for instance Equidistant English and In the Beginning.

The Message in Triplicate

To emphasise its supreme importance, and so we are left in no doubt, the message is given in triplicate. This is revealed by breaking the seal in further places, as indicated below. Note that all three encodings are symmetric about a line through the central word, which is the first word of Revelation 22.21. This kind of symmetry is a feature of the New Bible Code and is the hallmark of design.

I think you'll agree that the message is succunctly and elegantly written. But even the margins have been put to good use. Here's the message again with the ordinal values of the word blocks either side of the last two statements.

The numbers either side of 'The Second Coming' sum to 284. This is Theos, which means 'God' in Greek. All four numbers sum to 654, which is the standard value of  'Word' in English. So these supplimentary encodings speak of God's Word, which created the heavens and the earth - and imprinted the New Bible Code upon the NIV Bible.

The Seal, the Emblem and the Message

Here, then, are the seal, the emblem and the message. All of these imprints are found within unbroken word strings, and together they form an elegant and symmetrical pattern  - the hallmark of sender.

God has created a code within the NIV Bible announcing the greatest event in history. To assure us of its authenticity He has placed his Royal Seal across the NIV's 'alpha' and 'omega' verses, and stamped them with the numerical emblem of His Son in the languages of the NIV Bible and of the Old and New Testaments. That seal is now broken and the message thereby revealed can be read in detail in the pages that follow on this website.

1. This was not by my own design. I had decided on the name long before I worked out its standard value (the ordinal value of 222 is also very apt). In particular the significance of the word 'New' had been impressed upon me by my life circumstances, which was why I added it to the obvious 'Bible Code'.