The Word of the Lord 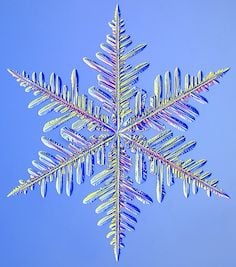 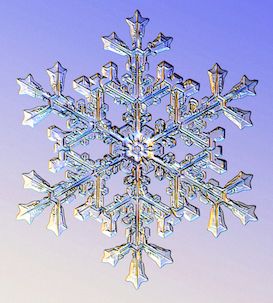 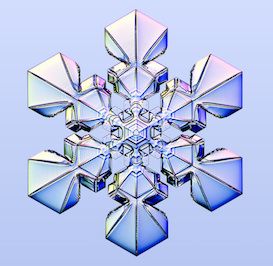 The prologue of the fourth and final gospel begins with a seminal statement introducing the logos/word. Later John identifies Jesus Christ as "the word made flesh" (John 1.14). Putting this together with the opening verse, we see that since the word is God, Jesus is God incarnate. The identification of Jesus Christ with the word is given remarkable support through the numerical values of biblical words and geometry associated with the numbers. These create a web of meaningful relationships between the two concepts and simultaneously show us that the word was intimately involved in the evolution of language and the creation, codification and translation of scripture, through all of which he has revealed himself to us.

Before reading this page you might like to familiarise yourself with G-triangle geometry and the Koch snowflake. The systems of numeration utilised by the code are described here.

If a search for biblical words related to the spoken word is conducted we find that the triangular number 253 is highlighted, both in Hebrew and in Greek, as the standard value of these words. 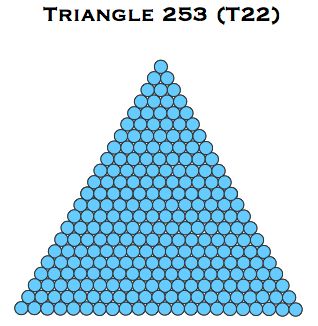 This triangular expression of 253 is also a G-triangle, meaning it can be taken one or more steps towards the fractals known as the Koch snowflake and antisnowflake, through the addition or subtraction of units. 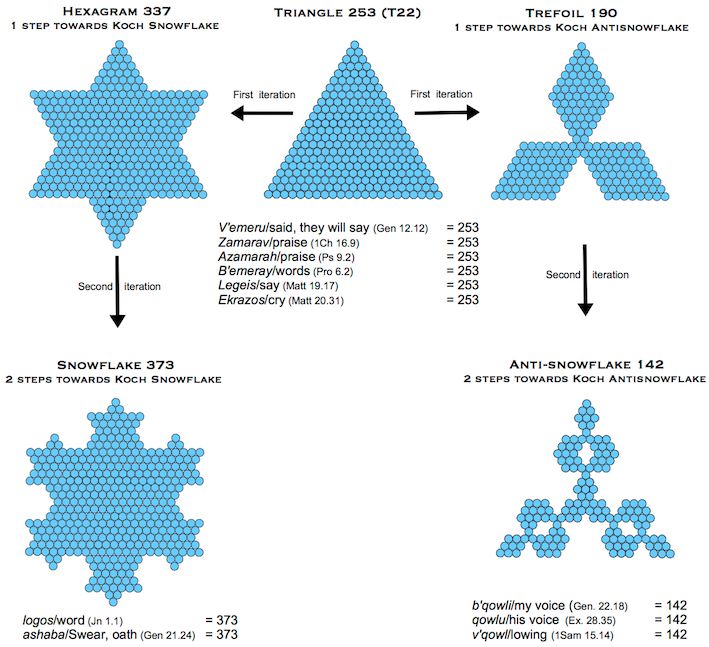 A larger version of antisnowflake 142 is also linked to the idea of speech. This figure was created from G-triangle 496, which, like triangle 253, can be taken two steps towards the Koch antisnowflake. If its complementary hexagon, with 331 units, is taken one step towards a Koch antisnowflake (which works with hexagons as well as triangles) a triangular trefoil of 196 units is the result. [1] This is the ordinal value of the seminal phrase first used in Genesis 15.1 (NIV), 'the word of the LORD'. It is also the standard value of the verb 'speak'.

The Hebrew word qowl/voice has a standard value of 136 and the idea of speech is expressed through G-triangle 136 and all its derivative figures.

The concepts of the voice and the tongue are related through the geometry of G-triangle 1081, which can be taken one step towards snowflake to create hexagram 1441 with hexagon 721 inside. 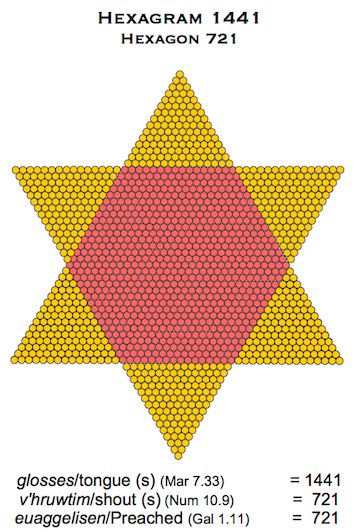 Thus we see these fractal snowflakes underpinning the numerical relationships between meaningfully-related words and phrases with geometric relationships. It also spans three languages: biblical Hebrew and Greek, the languages of the original scriptures, and modern English, the language of the NIV Bible. [2]

The Word and Jesus Christ

If Jesus Christ is the word we would expect this to be reflected in the geometry of these elegant figures. As this website reveals, the New Bible Code is primarily based on modern English, so let's look at the standard value of the name 'Jesus Christ'. 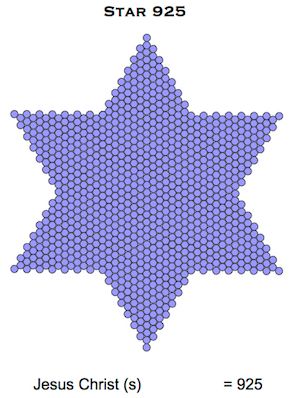 The Star of David indeed! If we now superimpose snowflake 373 upon the star, after rotating it 30 degrees, we have a perfect fit. 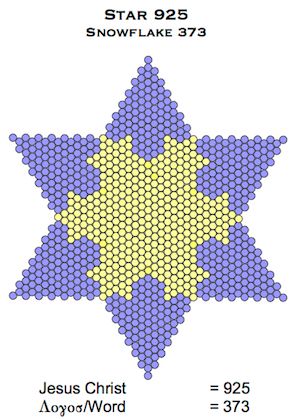 The two most important systems in gematria are the standard and ordinal values. The ordinal value of Jesus Christ, 151, is automatically created along with snowflake 373 if we show the internal structure created by the two iterations.

Snowflake 373 (sometimes called the 'logos star') also accomodates another star with 115 units, representing the Hebrew name Yehoshua HaMashiach/Jesus the Messiah, again under the ordinal value system. The direct English equivalent, Jesus the Messiah, has an ordinal value of 181, which is a hexagram touching the centre of each hexagram in the outer ring of snowflake 373. Merging star 115 with this hexagram gives a double snowflake with 205 units, ordinal value of the Greek name Ihsous Christos/Jesus Christ. 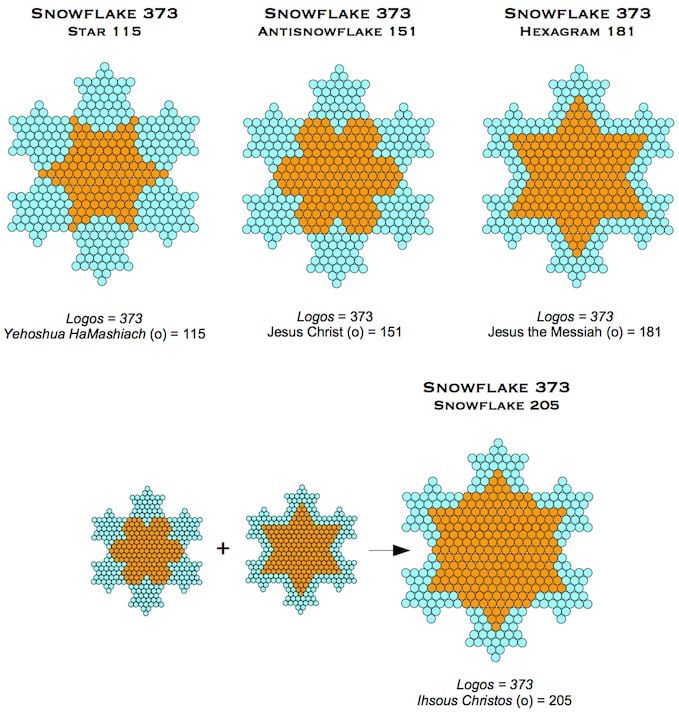 This journey began with triangle 253. But the number 253 has a second geometric form, that of a hexagram 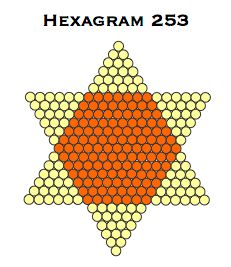 Hexagon 253 is based on G-triangle 190. As a G-triangle it can be taken one or more steps towards a Koch snowflake or antisnowflake. Hexagram 253 is its first and only step towards the snowflake. [3]

Three of these hexagrams can form a trefoil of hexagrams, which speaks loudly and clearly of Jesus' status as the word of God.

This trio of related figures is a particularly striking example of the analogy the code makes between the perfection of God's word and the perfection of snow crystals, surely the most beautiful of natural phenomena. [4] 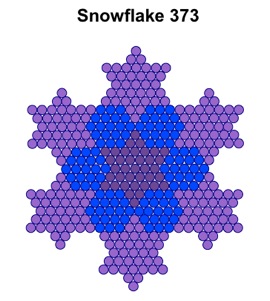 For more snowflake geometry directly related to Jesus Christ see Christ's Snowflakes, The Creation Snowflake and other pages on this site.

The Word of the Lord

The word is first mentioned in Genesis 15.1, where the phrase "the word of the Lord" is first used:

After this the word of the LORD came to Abram in a vision: "Do not be afraid Abram. I am your shield, your very great reward."

In Hebrew, the phrase davar YHVH/the word of the Lord sums to 232, which is also the gematria of the first words spoken by God: yari aur/let there be light!

The number 232 is suggested by the internal structure of the Hebrew Genesis 1.1, and is geometrically a triangular trefoil. This figure is the first step towards a Koch snowflake, starting with hexagon 397, 397 being one of the standard values of 'Jesus' in Hebrew (Ex. 24.13) and 'the Lord' in English. 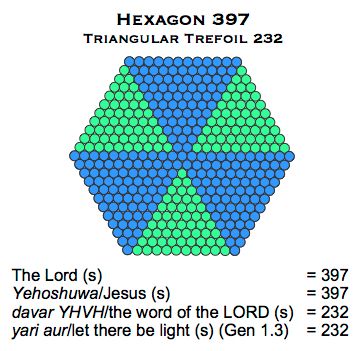 I showed earlier how the ordinal value of the English phrase 'the word of the Lord' is 196, a triangular trefoil and the standard value of 'speak'. [5]

The standard value of this same English phrase is 1330:

1330 is a tetrahedral number. This is the 3D extension of triangle 190, from which hexagram 253 derives, and the value in Greek of one spelling of 'Christ' in the New Testament. 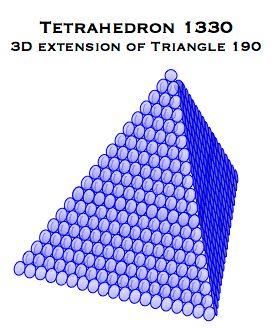 The word has been given.

1. Hexagon 331 also precisely accommodates a regular trefoil summing to 106 units. This is the standard value of 'grace'.

2. I would like to thank Kathy LeCorre for her assistance here.

3. This hexagram can also be formed by the self-intersection of triangle 190 (T19).

4. This may be more than an analogy, as suggested by the pioneering work of New York Times best-selling author Masuro Emoto, who claimed that the shape of ice crystals forming in water can be changed by communicating words to the water as it freezes.