The Lock and the Key 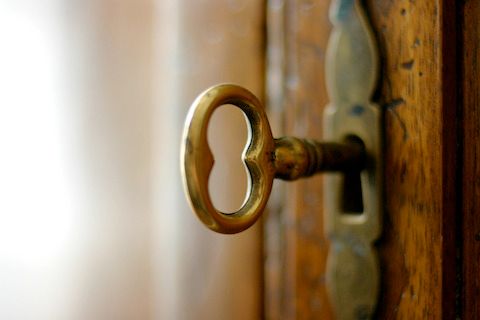 He will be the sure foundation for your times,

a rich store of salvation and wisdom and knowledge;

the fear of the LORD is the key to this treasure.

My commision to unlock the New Bible Code began with my receipt of a special type of key, which showed me how numbers had been encoded and were to be decoded. I received the Key on 26/11/01, eleven days after it was received by a woman who was my Alpha Course director at the time. [1]

Here is a photograph of the Key - what you are looking at is a manifestation, appearing on a previously blank slip of paper. Note that the text is actually shaped like a door key.

The verses in the Key were 1 Thess 5.23-24. They showed how the code works in the following way:

These and other encodings within the Key showed me that numbers are encoded as ordinal values and decoded as standard values.

So the Key also showed me where to begin looking for codes in the NIV Bible and led me to the jewels displayed in The Signature of Christ, The Creation Snowflake, Footprints in the Sand and other pages. [2]

In A Lily Lattice I showed how Pascal's Triangle, the Sierpinski triangle and a triangular slice of the Lily Pad share the same spine of inverted triangles.

The triangular slice of the Lily Pad sums to 528, which gives us another link to the idea of a key, because 528 is the standard value of the Hebrew word for 'key'. [3]

The Lily Pad is a hexagon, so, guided by the intriguing similarity between the triangles, I created a hexagonal lattice of the same dimensions as the Lily Pad from six copies of the Sierpinski triangle. Some of its spectacular connections to the code through gematria are summarised below. 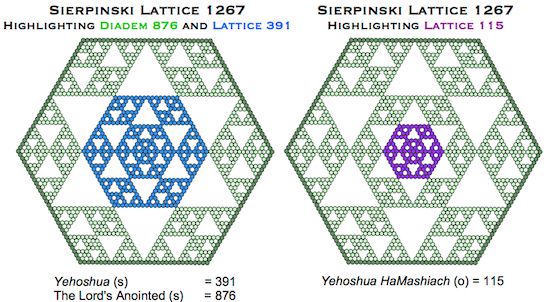 The code references fractals to symbolise life and growth and this 'Sierpinski Lattice' is another expression of that metaphor, resembling a lily pad ravaged by caterpillars.

In The Maker's Mark I revealed a new system of gematria I call the combined value. This system is validated within Pascal's triangle, which is the source of the combined values of 'Lord' and 'God' in English and Hebrew, both found 'double witnessed' within the first eight rows. [4] 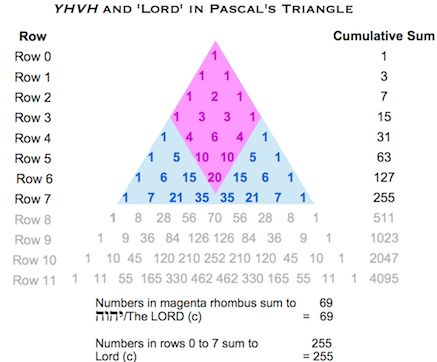 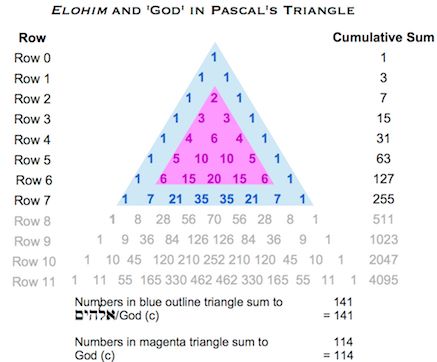 Notice how uncontrived, symmetrical and symbolic of the Triune God are these coloured areas, the hallmark of a craftsman of excellence - the Maker's Mark, no less.

If we now combine the two images into one, something unexpected emerges. 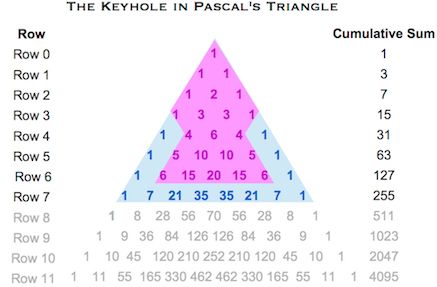 The superimposition of the four patterns creates the shape of a keyhole! If this is by design then the first eight rows of Pascal's triangle constitute a lock of some kind.

I said that there is more encoded information in the Key and in fact it encodes hexagon 169, because it consists of 169 letters and 42 words. These two numbers define hexagon 169, which has an outline of 42 units. [5] 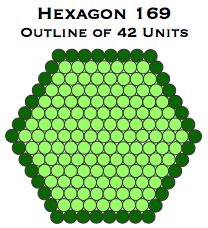 Near the end of A Lily Lattice I illustrate how hexagon 169 lies at the centre of a dense network of connections between G-triangle geometry and names of the Lord, mediated through gematria. It is in many ways a seminal figure, as will now be made abundantly clear.

So I symbolically put the key in the keyhole and turned it, revolving the triangular lock around the apex of Pascal's triangle to create hexagon 169, the very figure suggested by the Key!

The door opens into a garden of delights, containing the code's choicest plants and flowers. [6]

Many of the treasures are revealed by two turnings of the key.

1. If we take the double-witness encoding of YHVH and 'Lord' and turn this into hexagon 169, a hexagram of 73 numbers is created within it, those numbers summing to 391. 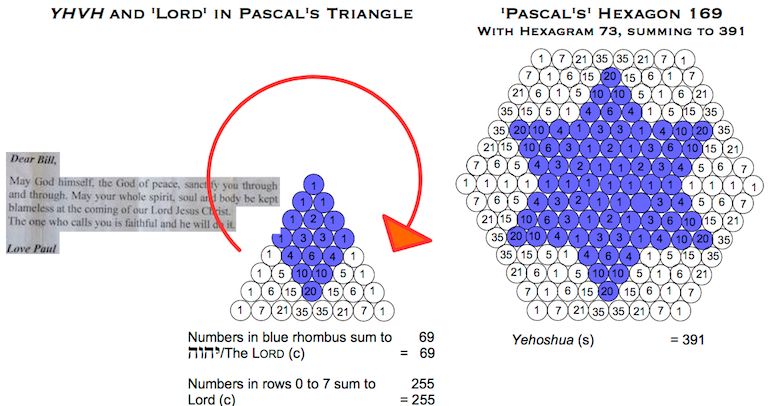 Sitting in the centre of the chest is the Lord himself symbolised by a Star of David!

From hexagram 391 a range of derivative figures can be created, all with related identities. 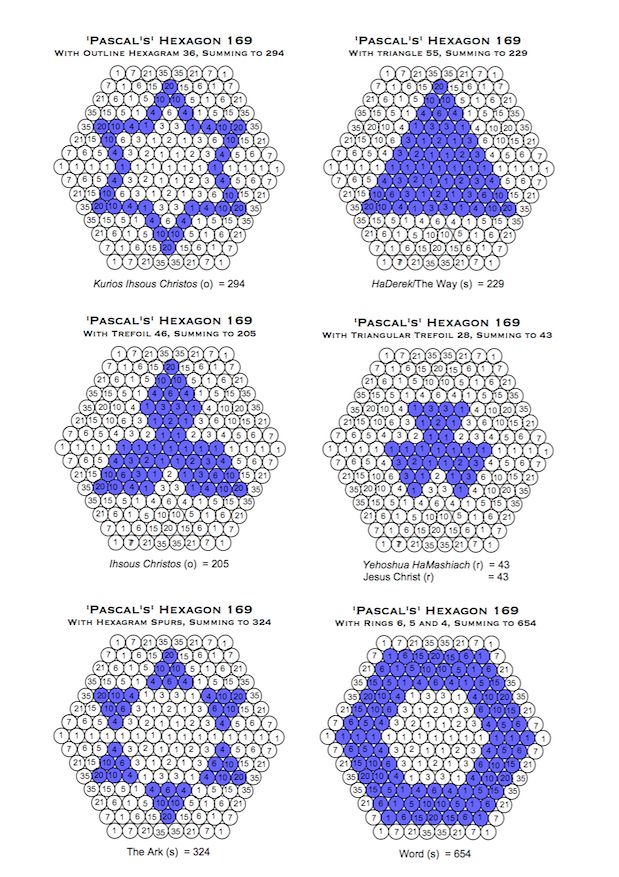 The New Bible Code exists to proclaim a single, long-awaited event and hexagon 169 and hexagram 73 combine to devastating effect in sending that very message in triplicate. 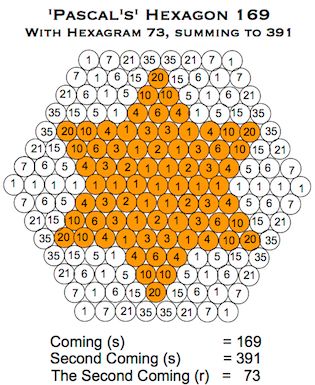 2. The second double witness encoding in Pascal's triangle pairs Elohim with 'God'. Turning the key to convert it into a hexagon gives the following result. 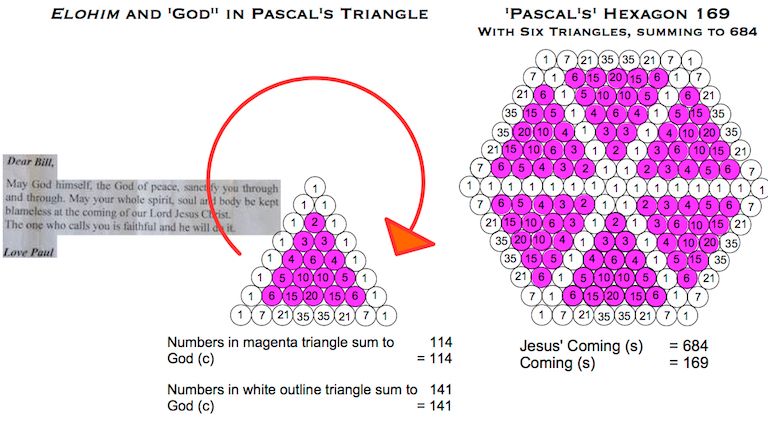 Again turning the key unlocks a message about the Second Coming!

3. The keyhole itself bears the same divinely-approved message. 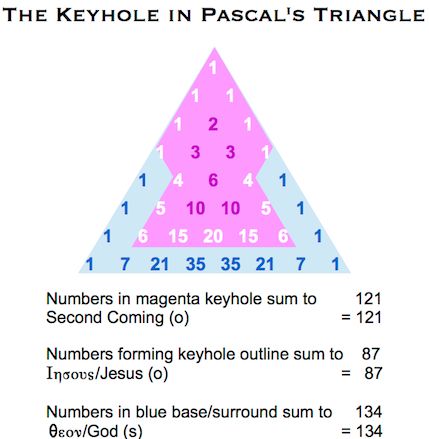 If we now turn the key, converting the triangle into a hexagon, we see the imprimatur of the Creator Himself. 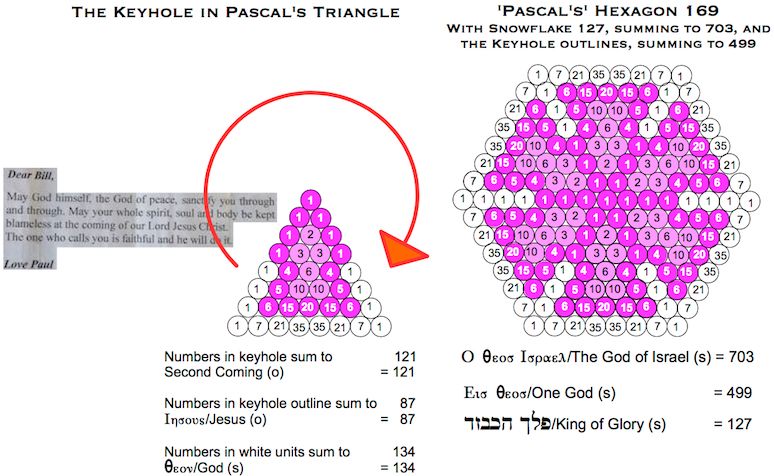 Firstly, it identifies its function in a spectacular double encoding that validates the New Bible Code's two-system unlocking procedure. 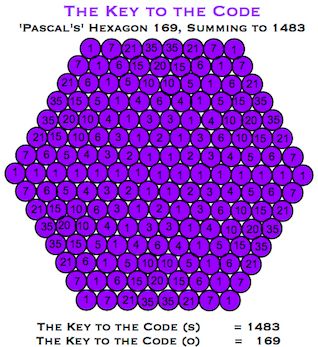 The words from Isaiah quoted at the beginning of this page are the second of two verses in that great book using the word 'key'. The first is Isa 22.22. Here is the NIV translation.

In a trilingual miracle, the emboldened phrase within this English translation of Hebrew words is encoded with a Greek numerical weight.

I'd like to point out one more identity for 1483, from Luke 1.64 in the Textus Receptus, the NIV translation of which is given below.

Immediately his mouth was opened and his tongue was loosed, and he began to speak, praising God. Luk 1.64 (NIV '84) 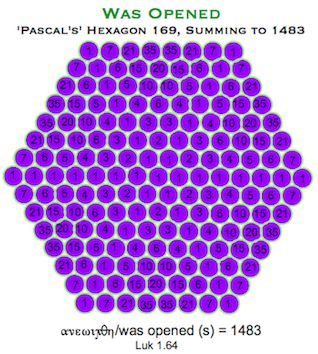 In the NIV, the lock and the key are encoded either side of the Garden, showing what I've tried to show above and throughout this site, that the Garden, which is the first seven verses of the1984 NIV Bible, is an information-rich holograph, the door to which is unlocked by the two-system key given me at the beginning of my journey - now at an end with the discovery of the lock. [7]

The reality of the Garden is twice double-witnessed in Hebrew and English in the table. The ordinal value of the first seven verses, which is 5478, or 913 x 6. 913 is the standard value of Bereshith/In the beginning, the first word of the Hebrew Bible. The number 6 refers to the work of Creation.

Finally, the hexagon identifies the code's Author, who guided the first scratches on middle-eastern parchment, the NIV's translation in the New World and everything in between from His Garden beyond time and place. 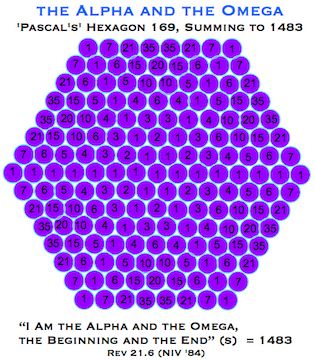 1. She had been sitting reading her Bible in a Christian cafe in the village of Uphall in West Lothian, Scotland, which was called - very aptly - The Open Door, when an inner voice twice spoke to her, saying "THIS IS FOR BILL". She had been reading 1 Thessalonians, the oldest book in the New Testament, and had gotten to 1Thess. 5.23-24 when she heard the voice. After this experience she was a little shaken so she stopped reading and made herself a cup of tea, marking the page she had stopped at with a plain piece of paper. When she returned she found the two verses she'd been reading typed on the bookmark and addressed to me! Eleven days later at an Alpha Course meeting, after I'd told our study group about a dream I'd just had about moving into a new house, she handed me the Key, telling me she believed it was for me. What she could not have known is that I'd just gone through the most tumultuous period of my life, culminating in the total healing of an old trauma on 11/11/01, during the Alpha Course  "Holy Spirit" weekend. Two days after that, on 13/11/01 I had made my first tentative code find. Two days after that I was given a double sign, which was the same day (15/11/2001) that the woman, who knew nothing of my experiences, was given the Key.

2. The Key itself is from the NIV Bible and its manifestation was the first of three signs that I was to take an interest in that version of the Bible. The second was when I was looking over a short paper I'd written on numerical coincidences involving the number 11 I'd noticed regarding 9/11. My eldest daughter walked into the house and handed me a Gideon New Testament. The third was when she and my wife went to Waterstones in Edinburgh to buy me a Bible for Christmas. As my wife stood in front of the bookshelf in the 'Religion' section of the bookstore, an NIV Bible fell from the shelf into her hands.

3. 528 takes part in many other important identities and I would like to direct the reader to the entry on 528 in Richard McGough's excellent gematria reference table.

4. The woman lived in Atlanta, Georgia, USA and was in a hospital with her daughter when two paramedics carrying a patient stopped beside them and stared at them, before taking the patient into another room and then apparently disappearing (there was no other way out than the way they entered but when her daughter checked there was nobody in the room). The two paramedics had different titles on their lapels. One said ANGEL RESCUE, with an ov of 110, and the other said GUARDIAN ANGEL TRANSPORT, with an ov of 255, splitting into GUARDIAN ANGEL (114) and TRANSPORT (141). These are all triangles in the first eight rows of Pascal's triangle and are the combined values of God (114), Elohim/God (141), and Lord (255).

6. As with the Lily Lattice, this hexagon of numbers can also be seen as a hexagonal pie made from six 'slices' of Pascal's triangle.

7. I was told in December 1998 that I would spend twenty years unlocking the code, which was correct.