The Tree of Life in The New Jerusalem 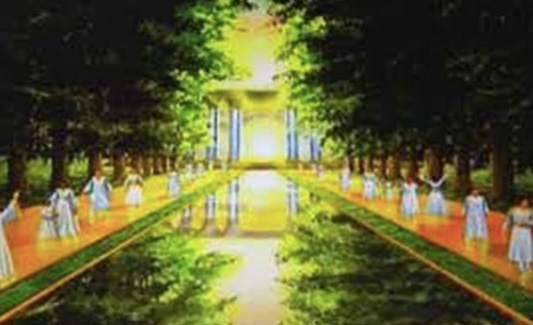 This page is the second part of The Leaves of the Tree.

In the previous page I showed encoded images of the two trees in the Garden of Eden and the single Tree of Life found in the New Jerusalem. There were two separate trees in the original Garden, but only the Tree of Life in the Holy City, standing either side of the river of the water of life, which implies that two trees have now become one, division becoming unity through the Resurrection of Christ.

All of this is referenced in the biblical images. In one sense the Tree of Life is the Bible, God's Word. The trees have the Bible's book count and testamental division and therefore reflect and recommend the Bible as God's Word.

The New Tree of Life

In Revelation 22.2 we read that the tree of life stood either side of the river of the water of life.

This is also illustrated in the code, giving us the complete Tree of Life. 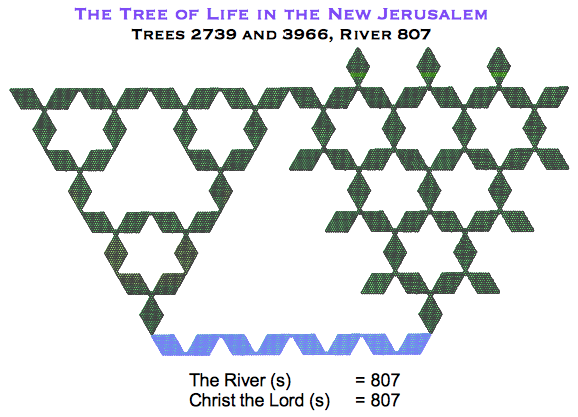 Revelation states that there were "twelve crops of fruit" on the tree. If a count is taken of the fruit on the entire tree, twelve can be seen.

In the prevous page I identified the fruit as a pomegranate, which has six-pointed flowers and crowns represented by hexagram-shaped spaces on its fruit. 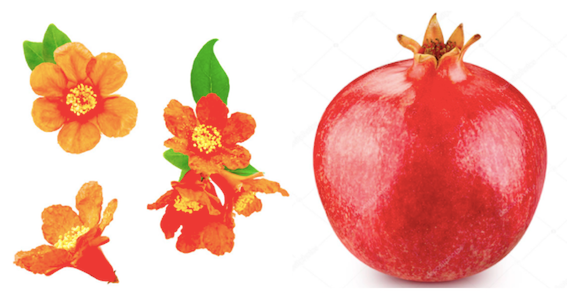 The fruit and leaves pomegranate have well-established medicinal properties, with three times the antioxidant levels of green tea, so they literally do have healing properties. [1]

There is a special link between the pomegranate and the High Priest of the Israelites. The robe of the High Priest of the Israelites was woven with pomegranates and bells along its lower hem. The pomegranate is a symbol of the promised land, as it was one of the fruits brought back by the spies when they entered Canaan (Numbers 13.23). The hundreds of seeds in each fruit represent prosperity and future generations. It also symbolises royalty and the temple, as the fruit has a small crown. The design was also used on the pillars of Solomon's temple (1 Kings 7.18-20). [1]

The identification of the Tree of Life with the pomegranate is strengthened by these encodings of the High Priest in the tree. 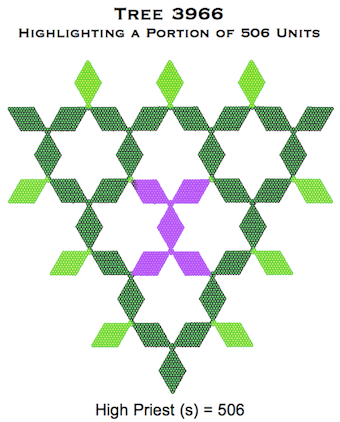 This is double-witnessed in a geometrical sense by the next exhibit. 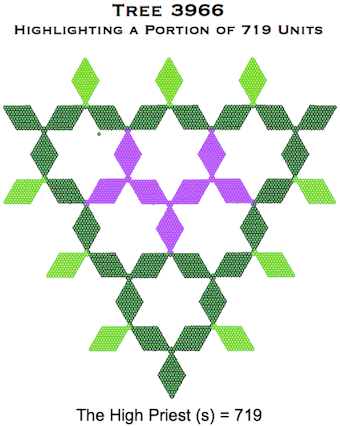 These two leaf patterns precisely map onto a beautiful trefoil in the very centre of the tree, representing the High Priest Himself. 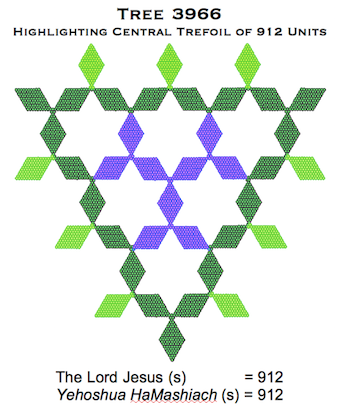 There are four pomegranate trees planted across the Garden, as shown.

These four encodings are in two overlapping pairs either side of the Garden and cover almost the entire garden, so this is undoubtedly the species of tree that we are to regard as the Tree of Life.

If we pick a single fruit from the tree we can examine its structure. 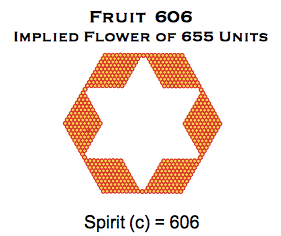 So these are fruits of spirit! There are 606 'seeds' (arils), not far from the Jewish tradition of 613 seeds in a pomegranate.

If we add a leaf we reveal the pomegranate fruit itself. 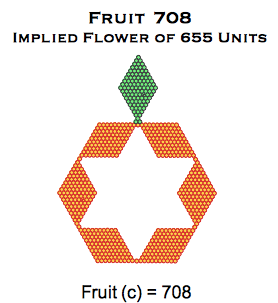 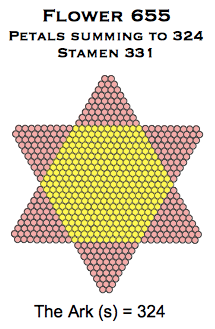 The word 'flowers' touches all the flowers on the tree through the central trefoil, already identitied with Jesus Christ. 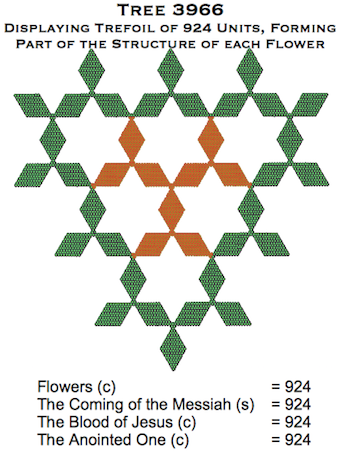 That these are fruits of spirit there is no doubt, but for doubting Thomases there is one more floral tribute to see.

The Tree of Life came from numbers encoded in the Garden (Genesis 1.1 - 5, NIV '84), which is itself the image of the New Jerusalem, wherein the Tree stands.

These three numbers are all found on the Bible's initial word string, an improbable occurence (among many here), and are synonymous in meaning. Therefore we can trust that these are signs on the garden gate, welcoming us to the Holy City, the New Jerusalem.  Here is the river encoded along with it.

The Tree also resembles an ark. In Genesis 8.11 a dove brought back an olive leaf back to Noah in his ark, so that he knew the waters had receded. This is another type of resurrection, as was Aaron's staff that had budded. The dove is a symbol of the Holy Spirit and the leaves symbol of new life.

In the previous page I show how Aaron's staff can be pruned from the old tree of life The staff becomes Aaron's staff that had budded on the new tree of life, from which comes the blood of Christ. Together the trees represent the justice and mercy of God.

The River itself bears exactly the same number as 'Christ the Lord',

The New Bible Code itself was created by the Water of Life.

As you can see, both numbers are also linked to statements of the Second Coming. We also have this identity:

Tables showing the first Tree of Life encoded in the Garden are found in The Tree of Life.

All these structures with the trees are arrangements of leaves, which Revelation tells us are 'for the healing of the natons'.

There are 27 leaves on the old Tree of Life, 39 on the New Tree and 66 overall, which, along with their unit counts of 2739 and 3966, perfectly reflect the book structure of the Bible. Therefore the trees obviously represent the Bible and the leaves also symbolise its books and, more loosely, its pages.

Now I'm going to prune the New Tree of Life a little and gather some cuttings.

Let's begin at the beginning, which takes us back to tree 2739, the tree of life in the Garden of Eden. 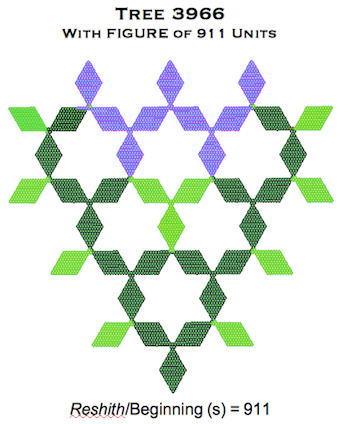 The fall of the twin towers on 911 announced the beginning of something new, something which fully manifested on 24/11/21: the New Bible Code, which is my gift to the world. In partular I recommend the Garden of Eden, which has been for me and can now be for the world an oracle. [3]

The Hebrew Bible's first word is Bereshith/in the beginning, which is 913, two more than reshith. If we trisect the tree of life into three equal parts we find they each have 913 counters. The component figures are tree 912 (the Lord Jesus (s)) with an extra counter taken from the three sitting at the centre. 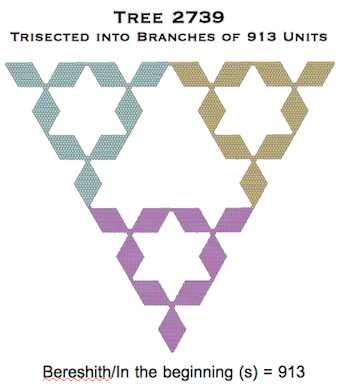 If we now trisect the New Tree of Life we reveal the Word, who was with God in the beginning. 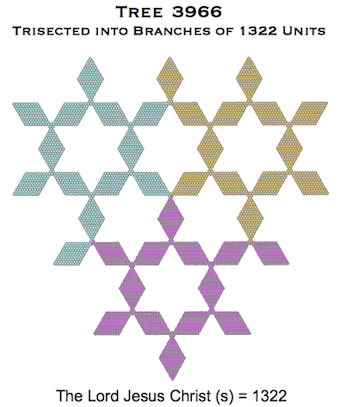 Now we have the full title" 'The Lord Jesus Christ'!

The original tree of life stood in the middle of the Garden of Eden. 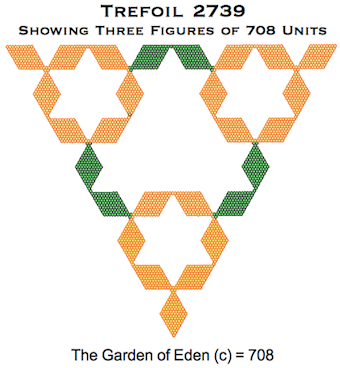 The new tree of life stands in Zion. 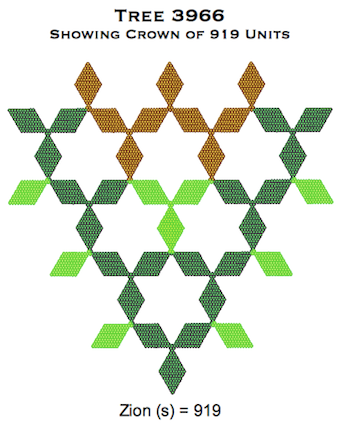 In the centre of Zion is the trefoil 912, representing Jesus Christ in English and Hebrew..

I said in the last page that 912 is also the value of 'the Serpent', which tempted Adam and Eve into eating the fruit of the tree of knowledge.

That old serpent is now gone and, like the Tree of Life and as befits the Second Coming, is now replaced by the symbol of life itself.

Behold the Twinned Serpent, the giver of life through DNA and the Most Holy Place holding the ark itself. Inside are two pomegranates in the bush, each bearing the gift of Spirit, which are also the twin tablets of the testimony, with the genetic code of life itself written upon them. 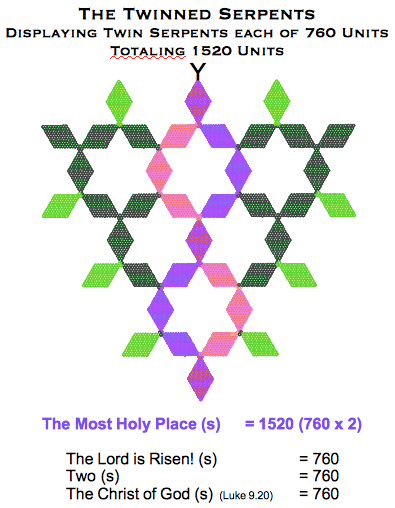 Finally, the secret within the Secret Code can be revealed:

The mother has given birth to a baby Boy, and so the Second Manifestation of Jesus Christ is now complete.

This figure came from the self-union of trefoil 2368 and represents the New Jerusalem itself, coming throough the self-intersection of trefoil 2368, the same process that lies behind the geometry itself underlying the entire New Bible Code. 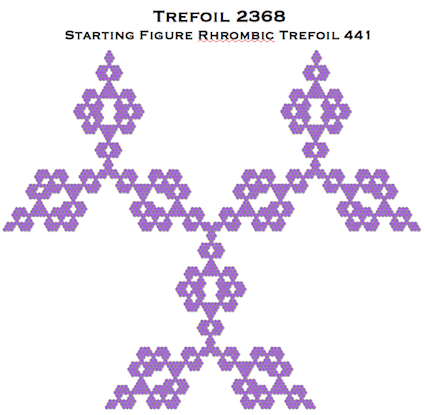 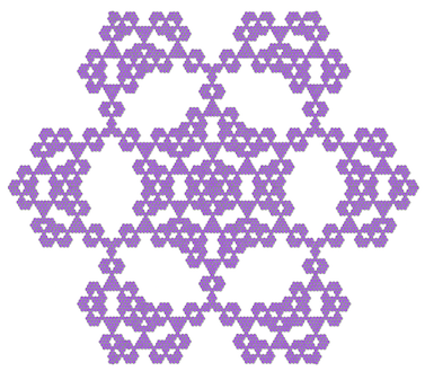 1. These properties, along with those of other healing plants, may become very useful in the near future.