One of Jesus’ best known and most spectacular miracles was the feeding of five thousand people with a few loaves and fishes. All four gospels have accounts of that miracle, but less well-known is the fact that two of these gospels, Matthew and Mark, record that Jesus also feeds four thousand people in similar fashion. These stories, whether or not they are based on real events, have more to say to us than the simple recounting of a miracle, as I eventually discovered.

The main point of interest for me is that the accounts are peppered with numbers, which vary between each account in a manner that suggests they have a deeper message to convey. I struggled with these numbers on and off for two years, trying in vain to extract some esoteric message. However, I was looking for subtleties that just weren’t there. Also, at first I didn’t realise that the events of 9/11 were encoded throughout the Bible. But once I knew what I was looking for, it only took me a few minutes to correctly decode the numbers.

Rather than give each gospel account in full, I will simply reproduce the verses that have the numbers. After that I will show how these numbers can be very simply combined to create totals with factors that point inexorably towards the Second Coming.

There are no less than six versions of the story of the miracle of the loaves and fishes. What I am going to do now is extract the numbers found within each account to obtain six numerical subtotals.

17 “We have only five loaves of bread and two fish”, they answered.”
19 ... Taking the five loaves and the two fish and looking up to heaven, he gave thanks and broke the loaves....
20 They all ate and were satisfied, and the disciples picked up twelve basketfuls of broken pieces that were left over.
21 The number of those who ate was about five thousand men, besides women and children.

32 “...I have compassion for these people; they have already been with me three days and have nothing to eat....”
34 “How many loaves do you have?” Jesus asked. “Seven”, they replied, and a few small fish”.
36 Then he took the seven loaves and the fish,...
37 They all ate and were satisfied. Afterwards, the disciples picked up seven basketfuls of broken pieces that were left over.
38 The number of those who ate was four thousand, besides women and children.

37 ... They said to him.“That would take eight months of a man’s wages!”....
38 ... When they found out they said, “Five—and two fish.”
40 So they sat down in groups of hundreds and fifties.
41 Taking the five loaves and the two fish and looking up to heaven, he gave thanks and broke the loaves. Then he gave them to his disciples to set before the people. He also divided the two fish among them all.
43 and the disciples picked up twelve basketfuls of broken pieces of bread and fish.
44 The number of the men who had eaten was five thousand.

2 “I have compassion for these people; they have already been with me three days and have nothing to eat.”
5 “How many loaves do you have?” Jesus asked. “Seven”, they replied.”
6 ... When he had taken the seven loaves ad given thanks, he broke them and gave them to his disciples to set before the people, and they did so.
8 The people ate and were satisfied. Afterwards, the disciples picked up seven basketfuls of broken pieces that were left over.
9 About four thousand men were present...

12 Late in the afternoon the Twelve came to him and said...
13 ... They answered, “We only have five loaves of bread and the two fish—unless we go and buy food for this crowd.”
14 (About five thousand men were there). But he said to his disciples, “Make them sit down in groups of about fifty each.”
16 Taking the five loaves and the two fish and looking up to heaven, he gave thanks and broke them.
17 They all ate and were satisfied, and the disciples picked up twelve basketfuls of broken pieces that were left over.

7 Philip answered him, “Eight months wages would not buy enough bread for each one to have a bite!”
9 “Here is a boy with five small barley loaves and two small fish, but how far will they go among so many?”
10 ... There was plenty of grass in that place and the men sat down, about five thousand of them.
13 So they gathered them and filled twelve baskets with the pieces of the five barley loaves left over by those who had eaten.

A summary of the numerical subtotals for each of the six accounts, along with its biblical reference, is given in the table below. 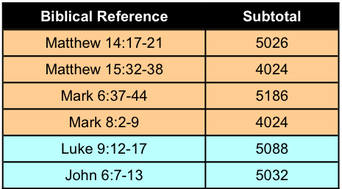 It turns out that if we sum these numbers in their biblical ordering (which is the order in which they are given here), then factorise the running total as we go along, we notice that a familiar factor appears, and in a way that harmonises with the peculiarity of the gospel accounts.

From the table it can be seen that the multiples of 11 mark the colour-coded passages.

1. The total of the multiple accounts in Matthew and Mark, coded brown, is a multiple of 11.

As this website shows, eleven was woven to an extraordinary degree into the NIV Bible and the events of 11 September, 2001, and is the key to unlocking the incredible message of the New Bible Code, the announcement of Christ's Second Coming. Accordingly, it is the reduced value of the following name:

The highest prime factor of the grand total of 28380 is 43. This is the reduced value of 'Jesus Christ'.

28380 also factorises into 55 x 516. These numbers proclaim the essential message of the code.

It already looks as if the accounts have been deliberately engineered to encode these numbers. Could the original authors have been the engineers? The fact that these numbers only have meaning now, in a language that did not exist when the Greek-speaking authors wrote the gospels, goes a long way towards refuting any such idea. However, if we now look at the biblical locations of these stories we become certain that they could not have engineered this wonder.

The next table lists the chapter number of the each account and the running totals of these numbers.

As you can see, the running total for the numbers coded brown is 43 and the grand total is 58. These are very significant because 43 and 58 are the reduced values of this name and phrase:

I found the number 58 encoded within these parallel accounts in two more ways. Firstly, I worked out each chapter's place value within the Bible then summed them as with the chapter numbers.

Next, I summed the verses within each account that contained numbers.

Thus the essential message of the New Bible Code, that 9/11 symbolised the Second Coming of Jesus Christ, is repeated here, encoded into the story of the loaves and the fishes. This was mainly through three numbers: 11 (9/11 and Jesus), 43 (Jesus Christ) and 58 (Second Coming). The encoding of the locations refutes any suggestion that the original authors encoded the numbers, because chapters were not added to the bible until the 13th Century and verses weren't added until the 16th Century.

The linking of the stories of Jesus feeding the multitudes with 9/11 and the Second Coming is another extraordinary example of the way the New Bible Code uses biblical narratives to symbolise what was achieved on 9/11. Although utterly tragic in one sense, 9/11 must have been nourishing on a spiritual level, the effect undoubtedly amplified by the power of the media so that the entire world was ‘fed’ on what happened that day.