The Ark and the Second Coming

Of all the encodings that make up the Genesis Watermark, perhaps the most startling are those naming the Ark of the Testimony (along with its main component parts) and the altar of incense, both of which were found within the Most Holy Place, according to Hebrews 9.3-5. These were the only items of furniture found there, making the four encoded word-strings a self-contained group. All of them proceed from the very first word of Genesis and they form a striking and indelible pattern. Here they are again.

Exodus 40.3-4 tells us that the altar was located in the Holy Place, just in front of the curtain to the Most Holy Place, which seems to contractict Hebrews 9. So one might argue that the connection between the ark and the altar is less solid than between the ark and its own component parts. However, although the physical location of the altar of incense was the Holy Place, in a religious sense it belonged with the ark. On the Day of Atonement the curtain was opened and the censer filled with coals and taken into the Most Holy Place: this could be considered to be an extension of the altar. In a religious sense the altar "stood before the Lord" (Lev. 16). Both the ark and the altar were sprinkled with blood by the high priest (Ex. 30). The altar was said to "belong to the oracle" (I Kings 6.22). So you can see that in terms of its religious significance, the altar belonged with the ark and that this is more important than its precise physical location. The altar of incense and the atonement cover are also types of Christ, the altar as a symbol of prayers and intercession, the atonement cover as the symbol of Jesus covering our sins with his blood. Moreover, its inclusion creates a 14-24-34 pattern along with the atonement cover and cherubim encodings.

I discuss the probability of this being a chance occurrence here.

The Testimony of Jesus' Second Coming

An elegant series of additions top and tail the above encodings, integrating them with the larger message of the New Bible Code, as they provide their own testimony to Christ's return. They also further validate the ark encodings. 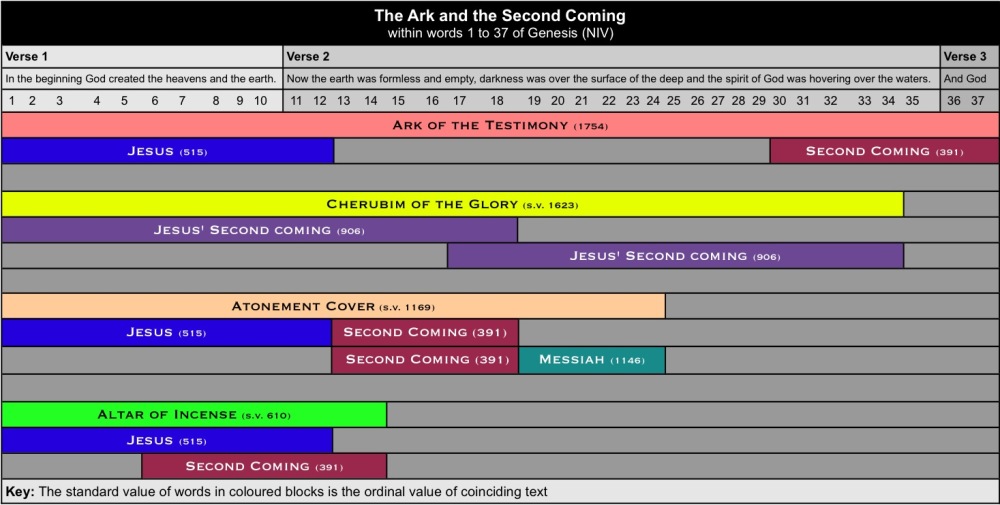 All of these additions are given in essentially the same form: JESUS' SECOND COMING, which is the initial announcement of the Second Coming written in cypher within Genesis 1, as detailed here. The only addition is the use of 'Messiah' proceeding from the end of the 'atonement cover' encoding. However, the meaning is the same and 'Messiah' is a close synonym for 'Jesus', frequently used in the code and in writings and common speech. [2]

There are further wonders to see here, again integrated with the ark encodings. Under the atonement cover is the Signature of Christ.

To see the main page introducing the Ark of the Testimony, please click here. The next page is here.

1. This is based on an average word value of 45 for the first five verses of the NIV Bible.

2. In fact there were four alternatives to chose from here. I considered this one to be the best fit.