In the previous page I showed that 9/11 was nothing less than a reenactment of the Day of Atonement, as it was practiced by the ancient Israelites. My conclusion was based on a comparison between the sequence of events on that day and the details of the atonement rite performed by the High Priest in the Tabernacle.

However, there was one nagging detail of the 9/11 attacks I couldn't square with the atonement ceremony. This had the potential to reduce my argument to a pile of unsupported assertions, but in fact it opened the door to a new understanding of 9/11 and the atonement rite itself. In reaching this understanding I was assisted by Kathryn LeCorre and Karen Gush, who introduced me to the inspired writings of the late E. E. Brooks.

A Change of Direction

During the atonement rite the High Priest entered the Most Holy Place within the Tabernacle from the east. In fact his journey to the MHP from outside the Tabernacle was a journey from east to west. 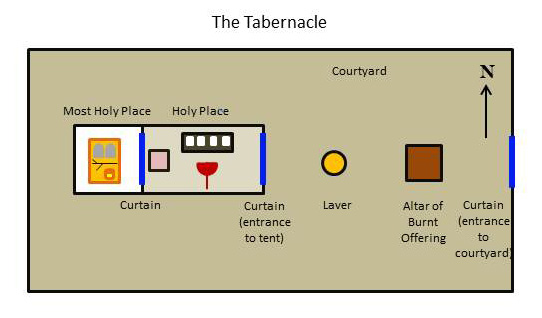 However, in the attack on the Pentagon - which symbolised the entry into the Most Holy Place by the High Priest - Flight 77 struck the Pentagon building from the west. 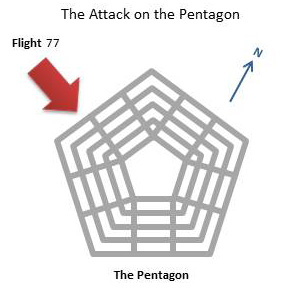 This is the sort of little flaw that rips huge holes in carefully spun theories. The North and South Towers of the WTC were hit from the north and south, representing entry through the two sacrifice gates in the north and south walls of the Jerusalem temple. The Most Holy Place was always entered from the east, whether we considered the Temple or the earlier Tabernacle, because they were built to the same basic plan and were oriented so that the curtains were on the east side of the sanctuary.

Unable to reconcile these facts I abandoned that part of the code for a while. However, two internet aquaintences, Kathryn LeCorre and Karen Gush, introduced me to the important writings of E. E. Brooks. In his essay The Union of the Spirit and the Soul, Brooks convincingly demonstrates that the Tabernacle was actually a metaphor for the female torso. In Hebrew the sides of the outer court were called katheph (shoulders), the sides of the Holy Place were called tsela (ribs) and, most significantly, the west wall of the Most Holy Place was named yarek (thighs). These details were lost in translation from Hebrew to English and so this parallel is largely unknown to Christians. 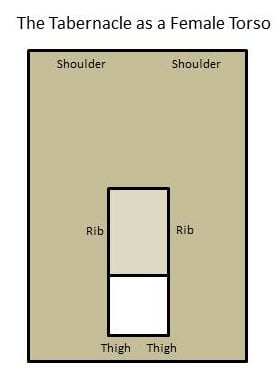 "God knew exactly what he was doing when he gave Moses specific instructions concerning the construction of the tabernacle in the wilderness. No part of it was without a symbolic meaning of the true tabernacle of our bodies. In fact the Hebrew words for many of the parts of Moses tabernacle were the same as body parts. For example the sides of the Outer Court were called shoulders. The sides of the Holy Place were called ribs, and the sides of the Most Holy Place were called thighs or loins! After study, we find the Most Holy Place is symbolic of the Loins (Womb) or the Generative Parts."(The Union of the Spirit and Soul, E. E. Brooks, Lighthouse Library International)

This insistence on physical perfection extended to his genitals. For instance, Deuteronomy 23.1 states "No-one who has been emasculated by crushing or cutting may enter the assembly of the Lord." The High Priest had to be a fully functioning male. As if to underscore this message, Deuteronomy 23.1 is encoded with the number 11. 231 is 11 x 21 and Deut. 23 is the 176th bible chapter, 176 being 11 x 16. This suggests that the 'crushing' of the twin towers on 9/11 was a sign that the system they stood for was 'not fit to enter the assembly of the Lord'.

The Most Holy Place contained the Ark of the Testimony and if the MHP was a womb, then the Ark had to be an egg. The entrance of the physically perfect High Priest would then symbolically fertilise that egg to create a child. Brooks showed that the items within the Ark were the generative parts of a male:

Heb 9:3-4 And after the second veil, the tabernacle which is called the Holiest of all (Most Holy Place); 4Which had the golden censer, and the Ark of the Covenant overlaid round about with gold, wherein was the golden pot that had Manna, and Aaron's Rod that budded, and the Tables of the Covenant; (KJV)

Contained within the Ark;

3.Two Tablets of the Covenant

First we will look at the Manna. Manna is a symbol of Seed or Sperm, which is needed to produce life in a female egg.

Exo 16:31 And the house of Israel called the name thereof Manna: and it was Like Coriander Seed, white ... (KJV)

Exod 31:18 And he gave unto Moses, when he had made an end of communing with him upon mount Sinai, Two Tables of Testimony, Tables of Stone, written with the finger of God. (KJV)

Remember that the Hebrew word 'stones' referred to 'testicles,' and the two Stone tablets of the Testimony are a type of the testes needed to bring life to the egg." (The Union of the Spirit and Soul, E. E. Brooks, Lighthouse Library International)

In summary, what Brooks discovered was that:

1. Aaron's Rod That Had Budded symbolised the penis

2. The Two Tablets of the Testimony symbolised the testicles

3. The Jar of manna symbolised the semen produced by a man.

Therefore the child created by this symbolic fertilisation had to be a male.

In Brook's essay I found a convincing explanation for the seeming inconsistency between the entrance of the High Priest into the Most Holy Place and the attack on the Pentagon. Brooks stated that since the Tabernacle represents a female body and the western wall of the Most Holy Place represents the thighs, the correct entry point into the Most Holy Place for the High Priest, who represented the male in this symbolic union, was not through the curtain on the east side but through the western wall. This was exactly what happened on 9/11 when Flight 77 (77 is the ordinal value of Christ) pierced the western wall of the Pentagon. The piercing of the wall was equivalent to the breaking of the hymen during penetration. Just as the male had to be physically perfect, so the female had to be a virgin.

The perfect cubic shape of the Most Holy Place was reflected in the gematria and statistics of the Pentagon attack.

2. There were 125 Pentagon employees killed during the attack. [1]

Could this male child be the male child spoken of in Revelation 12.5?

The chapter and verse again suggests 125, the cube of 5. Note that the NIV uses the term 'male child' rather than the more well known 'manchild'. Improbably, the standard value is the cube of seven.

Given that the Ark symbolises the ovum from which the male child grows, it is remarkable that the gematria of one of the Hebrew names for the Ark: Arown Elohim (the Ark of God) is also 343.

Finally, this is also the gematria of the first version of the Superscription in Matthew, also heavily encoded with cubes:

The Atonement Cover of the Ark was sprinkled with blood during the atonement rite performed by the High Priest. For Christians Jesus Christ is our Atonement Cover, his spilled blood replacing the annual sacrifices of the Day of Atonement. This is beautifully symbolised in the most extraordinary way within the New Bible Code. In The Ark of the Testimony, I reveal a fantastic encoding, which supports the Christian identification of the Atonement Cover with Jesus Christ.

Also encoded here are the other items within the Most Holy Place. [2]

The symbolism here is perfect:

Within the Ark of the Testimony, under the Atonement Cover were Aaron's staff that had budded, the two tablets of the testimony and the jar of manna - the most sacred objects in Judaism

So the atonement cover is being equated with Jesus Christ, which is exactly what Christians claim. He is our atonement cover, his shed blood 'covering over' (atoning for) our sins. Moreover, if the staff, tablets and manna represented the male generative parts and its fruit, then again the symbolism is perfect, as Jesus, our High Priest, was a male. The fertilisation of the 'egg' by the High Priest represents Christ's coming into the world.

Brooks insisted that the sexual union of male and female symbolised by the Day of Atonement was a metaphor for something purely spiritual. This was the seeding of God's Word in the minds of those who were prepared for it. Within the fertilised womb of that mind would then grow the male child (or manchild). He believed, as I do, that this would be the fulfillment of the prophesy in Rev. 12.5: 'She gave birth to a son, a male child, who will rule all the nations with an iron sceptre. And her child was snatched up to God and to his throne.'

Again gematria supports this interpretation. I said that the title 'The Male Child' has a standard value of 343, the cube of 7. The cube is a symbol of perfection in Judaism and 7 is the number of spiritual perfection, so the idea of something perfect could not be more aptly expressed in a number. 343 is als a condensation of 34 (Immanuel (r)) and 43 (Jesus Christ (r)). In The Septermber-11 Cube, I showed that the first version of the Crucifixion (the event that superseded the Day of Atonement) in Matthew was highly encoded with cubes, including Matthew's version of the Superscription, THIS IS JESUS, THE KING OF THE JEWS, with ordinal value 343. This identifies the male child with Jesus Christ. The name used in other versions, 'The Manchild', has a standard value of 358. This is the standard value of the hebrew word Mashiach, meaning 'Messiah', and again showing that the Messiah and the manchild are equivalent

The male child/manchild/Messiah is elegantly symbolised by the Star of David, formed by another union, that of downward and upward pointing triangles and standing for the fusion of spirit and matter, the seeding of the prepared mind with God's word. The encodings in Genesis 1 of 'Atonement Cover' and 'Ark of the Testimony' (see above) cover the first 24 and 37 words of the NIV Bible. These numbers suggest the 3rd Star of David in its series, with 37 units and an outline of 24 units. [3] 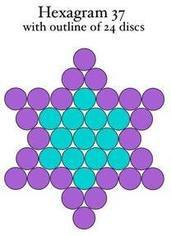 Hexagram 37 is utilised throught the code. In particular it is the seed for the Creation Snowflake, one of the primary symbols of the Second Coming.

The NIV title 'the Male Child' has a standard value of 343, the 7th cube, which features in The September-11 Crucifix. The ordinal value is 100, the 10th square and a side of the Most Holy Place of the Tabernacle, with outer dimensions 10 x 10 x 10 cubits. The reduced value is 55, which is the 10th triangle, and also the first fractal snowflake that can be created, with an outline of 36. This figure is singularly appropriate for a code that utilises snowflakes and antisnowflakes to symbolise divine creativity. 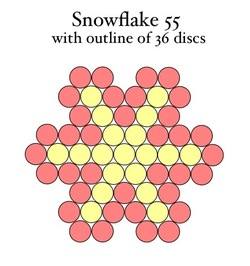 3. Yeshu is a diminutive of Yehoshua.