The Shield of David 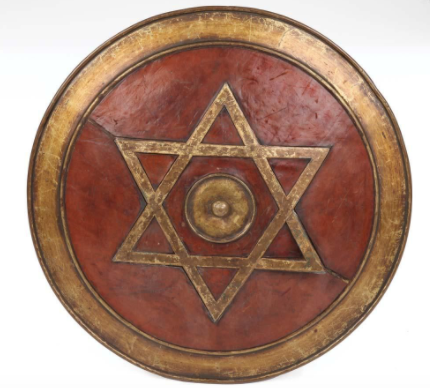 If we prune back some of the numbers in the Garden to reduced values, another layer of encoded material becomes visible. This page focuses on the very first verse of Genesis, where a shining star has been planted for us to dig up. I call it the Shield of David, named after the ancient symbol of King David.

The geometry underpining the New Bible Code is primarily based the fact that G-triangles will self-reflect to form a Star of David, the first step in the creation of the Koch snowflake. This merger of two triangles, one rising up from earth, the other reaching down from heaven, makes the star a perfect symbol of God come down from heaven to earth to live as man.

Triangle 91 is a G-triangle and the product of the first hexagram and its internal hexagon (13/7). These facts alone makes it an object of interest. However, In gematria 91 is the standard value both of 'man', HaElohim/God and Adony YHVH/The Lord God. 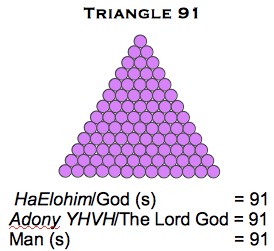 Therefore when Triangle 91 self-reflects, we see God meeting man in Star of David 121. [1] 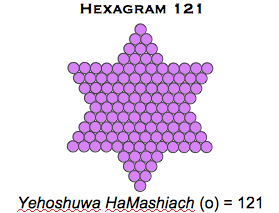 This shining star has been employed, both on its own and when nestled inside other figures, as the leading symbol of the Second Coming in the New Bible Code. Since the code begins at the NIV Bible's first word, the Shield of David has been placed within the opening verse, where is stands as a symbol of Christ's return within the Garden of Eden.

A Leaf from God's Book

The reduced value of Genesis 1.1 is 223, which is a trefoil of trefoils, as shown. 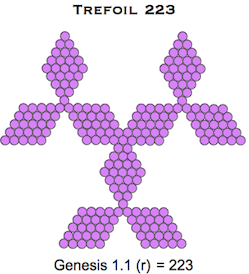 Each component trefoil sums to 75 units, which, significantly, is the ordinal value of 'Lord God'. Each leaf sums to 25, first found in Genesis 1.3 as yahi/let there be, in the phrase Yahi Aur/Let there be light, which were God's first spoken words and which sum to 232 [2].

‘I am the God of your fathers, the God of Abraham, Isaac and Jacob.’ Moses trembled with fear and did not dare to look.

These are God's words to us all, imprinted upon the opening verse of His Word. The symbol of those words, it's logo, if you like, will now be revealed. 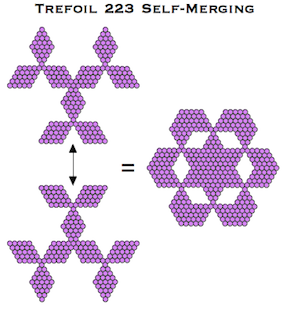 . . . . we obtain this beautiful, sculpted hexagonal antisnowflake of 391 counters, which I call the Shield of David. 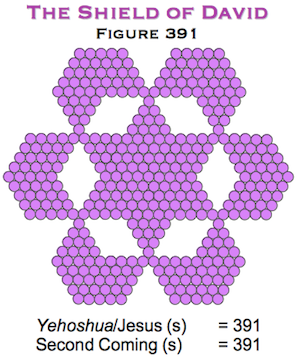 The shield represents Jesus' Second Coming, double-witnessed in English and Hebrew and by number and geometric symbolism. And it is a message given in triplicate.

Inside the snowflake is hexagon 121, the very star we derived earlier from triangle 91. This elegant figure sings the same message both in words and its well-loved form. 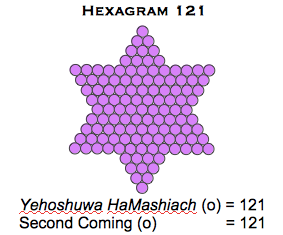 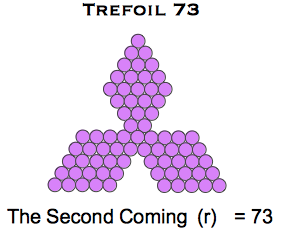 Trefoil 73 can be taken one more step towards an antisnowflake, resulting in antisnowflake 58, giving us our third related pairing. 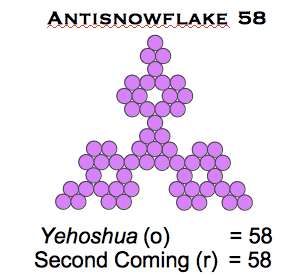 This is the Message for our time, delivered in triplicate through one elegant figure and three well-established systems of alphabetic numeration.

Several pages on this site show how the Second Coming has been encoded into the NIV Bible and into recent events, particularly 9/11 and the funeral of Pope John Paul II. 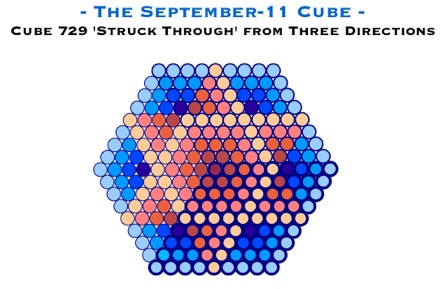 This projects the image of hexagon 217 with hexagram 121 inside, which makes the announcement. 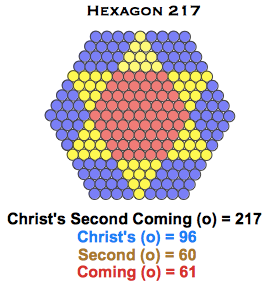 This hexagon fits precisely into the Shield, as shown. Beside the Shield is hexagon 547 from which it was sculpted, along with the English phrase from Luke 9.20 where it is found. 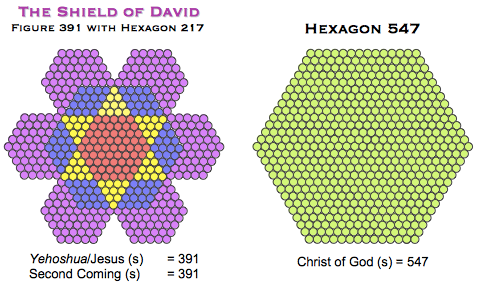 The chevrons around the central star of Tthe Shield of David each require 45 units, the standard value of the Hebrew Adam/man.

Triangle 91, with which I began, is the elemental triangle for hexagon 547, meaning six of them will fit round the central hub. The number 91, if you recall, is the standard value of both 'man' and two Hebrew titles for God.

So both figures are representative of Jesus as both man and God in one potent, supremely elegant logo.

God's Love and Will

Another trefoil of the same sequence as trefoil 223 is found in Genesis 1.1, This is trefoil 322, the ordinal value of words 2 to the end of the verse. Its elemental trefoil has 108 units, which is The Lord God (o), pairing it with trefoil 75 (Lord God (o)) in trefoil 223. The figure it produces on self-intersection is displayed below, with the two complementary divine attributes it describes, both in form and number, along with another Star of David. This star has 181 counters and also contains 91 as its internal hexagon (91 is a triangle, a hexagon and a pyramid). 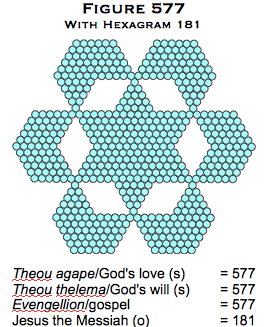 A third shield is found in this first, holographic verse, this time complete. The digit reversal with trefoils 223 and 322 are repeated with this figure of 241 units, formed from the self-reflection of trefoil 142. It's internal hexagram has 73 units, reduced value of 'The Second Coming'.

Everything is pointing to reversal here, so the principal figure we are now meant to examine is trefoil 142, which is shown here with the Hebrew phrase having that standard value, found in Gen. 22.18 and 1 Sam 15.14.. 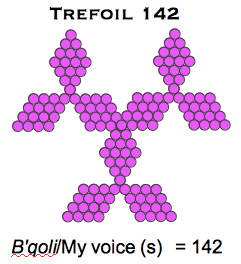 The elemental trefoil, three of which form this leafy plant, require 48 units, which is Son (o). 142 itself is also an antisnowflake that derives from triangle 253, linking 142 to the majestic stars and snowflakes representing Jesus Christ in Hebrew and English and the Word in Greek. So Jesus is the voice of the Lord, the Incarnate Word.

All three encoded figures are shown in the table below.

So we have David's shield in triplicate, the sign of God's Son at the head of the NIV Bible, vehicle for the New Bible Code.

1.Yehoshuwa is an alternative spelling of Yehoshua, with an extra vav. For an example, see Jos. 1.1. This increases the ordinal value from 115 to 121.

2. This is another trefoil, featured in my video The Mark of the Beast.