In The Maker's Mark I showed how rows 0 to 7 of Pascal's triangle have been used as the template for two of the most potent designations for our Maker: "Lord" and "God", in both English and Hebrew, which constitute a double witness to God's reality and omnipotence. Most , the sum of these first eight rows, 255, is the standard value of 'Lord God' and the combined value of 'Lord' in English. The triangular form also speaks of the Trinity. These associations are possible because the numbers forming symmetrical patterns within Pascal's triangle can be summed and compared with the gematria of the names and titles of God in each language.

Here I would like to add to this evidence by displaying symmetries within Pascal's triangle associated with Jesus Christ. The patterns must be symmetrical, firstly because there are a much larger number of asymmetrical patterns to be found and therefore symmetrical patterns, because they are relatively scarce, are more likely to be by design, secondly because the patterns themselves add further meaning, since certain geometric figures are important in Christianity or, as is the case with G-triangle geometry, are already established within the New Bible Code.

As before, all of the patterns are found within or around rows 0 to 7 (the first eight rows) of Pascal's triangle.

The first pattern to be shown is the hexagram that can be fitted nearest the apex of Pascal's triangle , which is hexagram 13. 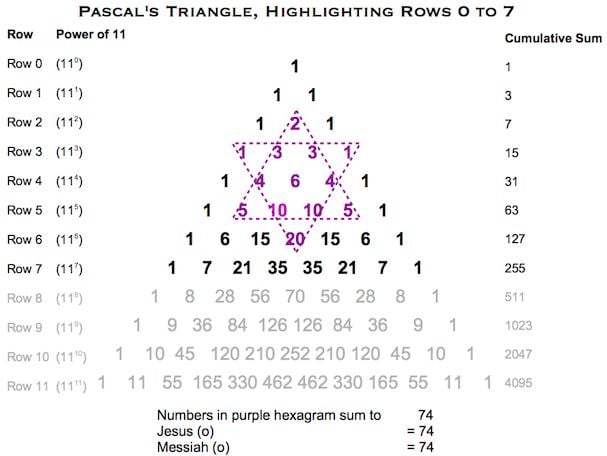 Here in the most revered object in mathematics, word, number and form combine to symbolise the God of Israel, manifesting in Jesus Christ, who is the Star of David.

Pascal's triangle contains precisely three sixes of its own, and these can be connected to form a isoceles triangle. This '666' is linked through its sum to the name given the Messiah in Isaiah 7.14 and 8.8 amd Matthew 1.23. [1] 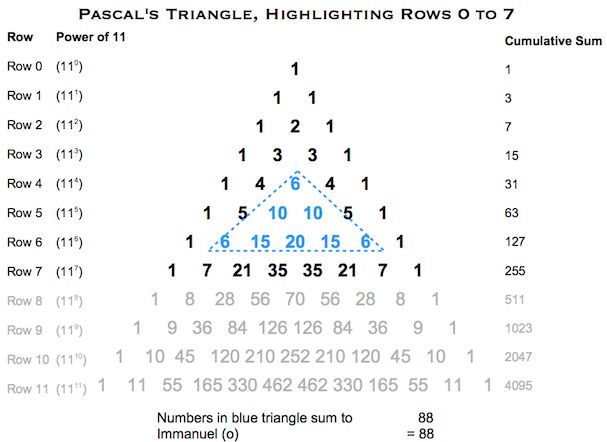 Now we come to staggering evidence that the numerical values for the name 'Jesus Christ' under the standard, ordinal and reduced values, and in both English and Hebrew, have been crafted to reflect symetrical patterns within Pascal's triangle. This is yet another example of the double witness phenomenon, which appears to have an important validating role within the New Bible Code.

First, lets look at the standard values, which are 925 (Jesus Christ (s)) and 754 (Yehoshua HaMashiach/Jesus the Messiah (s)). 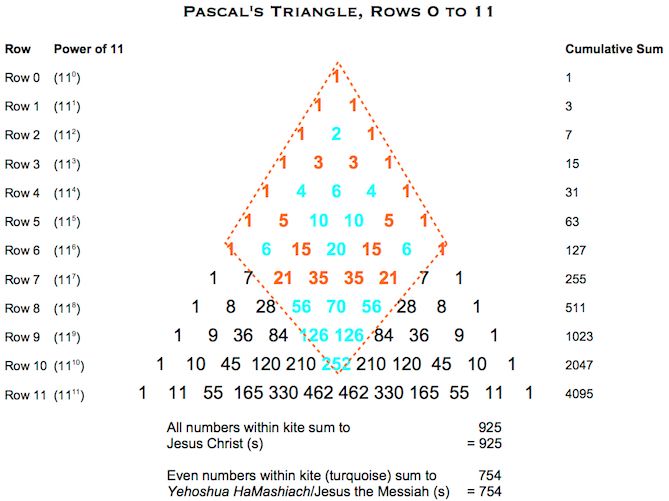 The even numbers within Pascal's triangle are mathematically significant, because subtracting them leaves an image of the Sierpinski triangle, an important fractal, and significant within the code too (this will be shown in the next page). The repeated alignment of important gematria with fundamental mathematics, which is displayed throughout this site, is an important indicator of intelligent design and consequently of the code's divine origin.

The ordinal value is next. In The Maker's Mark I introduced the technique of summing the mirrors of numbers in Pascal's triangle. For example, 12 becomes 21, 20 becomes 2, etc. Here it reveals another facet of the double witness phenomenon. 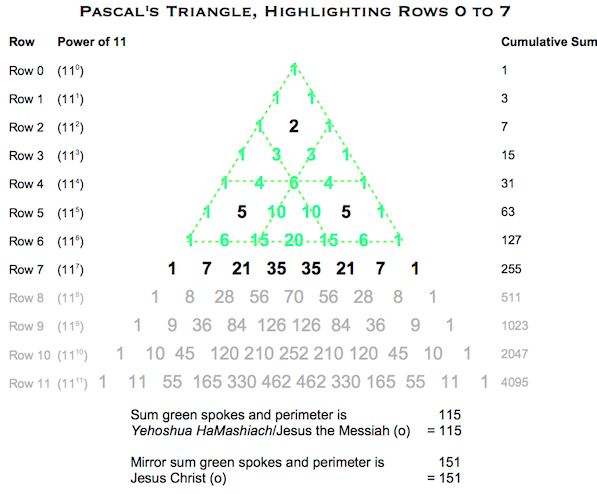 The reduced value of 'Jesus Christ' and 'Yehoshua HaMashiach' is 43 i both cases. This is found by drawing three spokes out from the cantral point of the first eight rows. 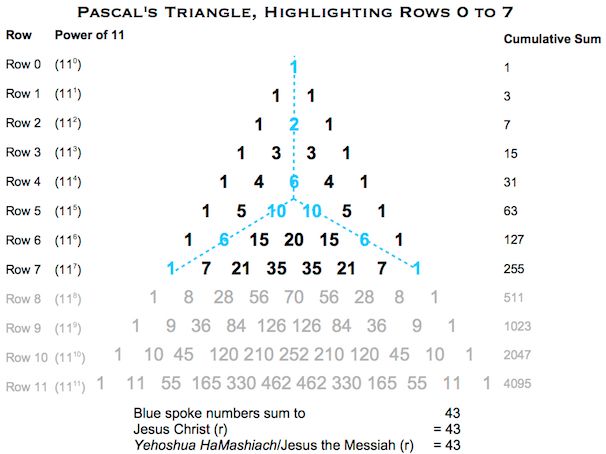 If we now add the outline triangle for the first eight rows to the above figure, we find another messianic number. 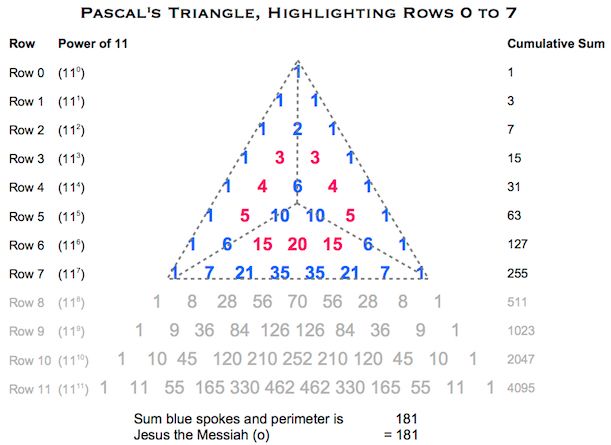 Finally we turn to the combined value for the Lord's name. 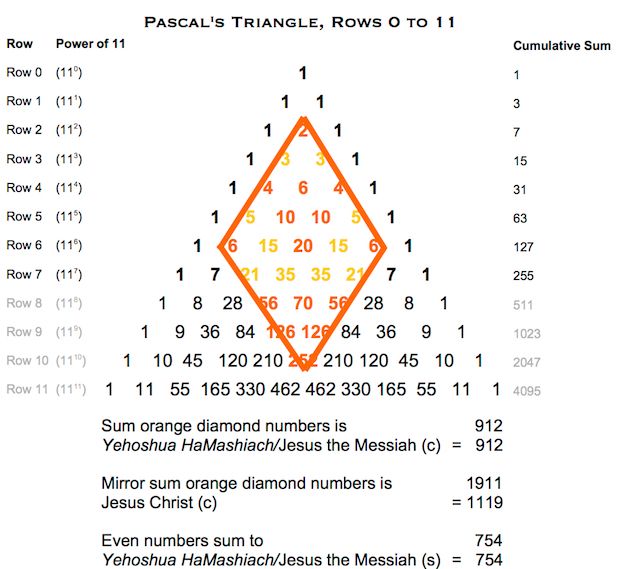 We also have these identities.

These dazzling correspondances between name, number and form show that the name 'Jesus Christ' has been crafted so that its numerical values under the three preeminent systems of numerial substitution unerringly point to the most revered object in mathematics, double-witnessed in the language of the original Old Testament scriptures and that of the modern NIV Bible. As such it adds to the evidence shown in the preceding page that Pascal's triangle is referenced in the two principal designations for our Creator in those same two languages.

2. I've only accepted one other match that wasnt exact, and for the same reason: it's so close it is obviously deliberate. It also reveals the code as a creative, 'best fit' endeavour, making optimum use of preexisting numerical, geometric and meaningful relationships.

Fellow researcher Kathryn LeCorre noticed that if the numbers 1119 and 1911 are added, the sum of 3030 is the gematria in Greek of 'The Son of Man' (nominative case). Jesus, of course, often called himself the Son of man.