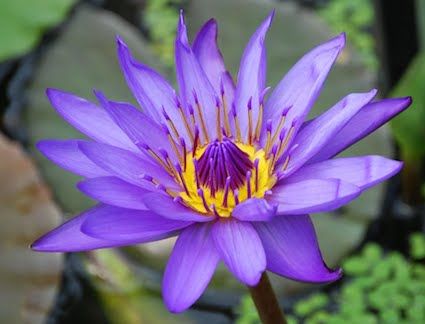 The Water Lily is a geometric template that uses the image and symbol of a water lily as a metaphor for life and growth, as with the trefoils and snowflakes already found in these pages and which decorate the Garden.

It grew out of an idea that came to me one evening in January of this year. The code utilises fundamental geometry, particularly the geometry of G-triangles, the one-in-three numerical triangles (non-centred) from which fractal snowflakes and antisnowflakes can be grown. One evening I asked myself if it would be possible to 'grow' the Star of David on a triangular grid by repetitions of the simplest possible process, starting with a single counter. If we see this counter as hexagram 1 and place it inside the smallest hexagon that will completely encompass it, hexagon 7, we have the first step of an iterated function that produces a fractal star made of nested hexagon/hexagram pairs. [1]

After I'd worked out the growth pattern that evening two things happened. Firstly, I realised that the figure was growing geometrically, doubling in side length at each growth stage, just as many plants repeatedly double in size over a set period during their vegetative stage. The resulting figure looked remarkably like a water lily, which gave me the name for the figure. Secondly, I received the word TEMPLATE. I soon discovered I had been led to a large, well-stocked lily pond.

Here are the first five stages in the growth of the hexagram/hexagon pairs. 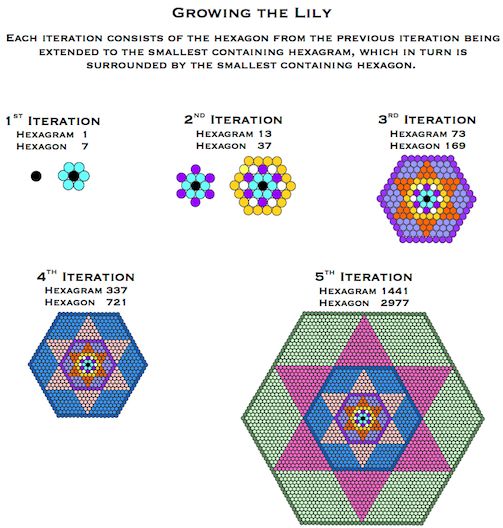 The iterative process can go on forever, of course, but the first five iterations are all we require. The fractal image this process creates already resembles a water lily flower and pad, with the hexagon at each stage resembling a giant lily pad when the rim is coloured. 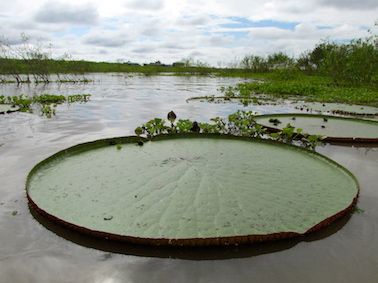 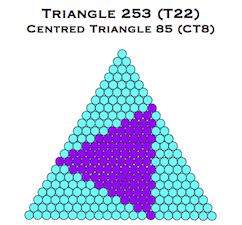 This gives us a second way of growing the water lily, as shown here. 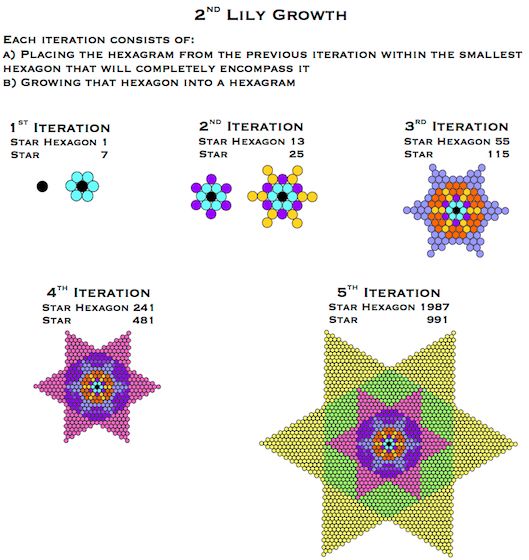 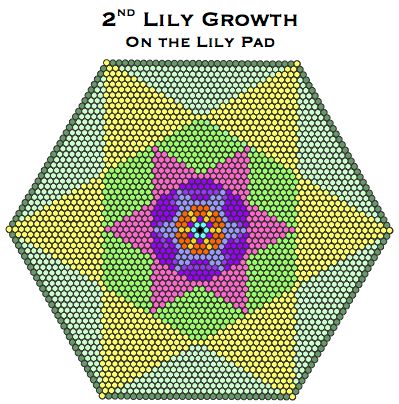 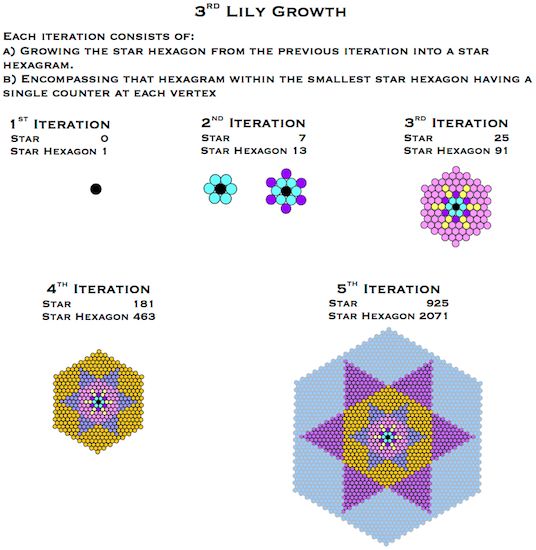 The fifth iteration is just encompassed by the hexagonal lily pad created by the 1st lily growth sequence. 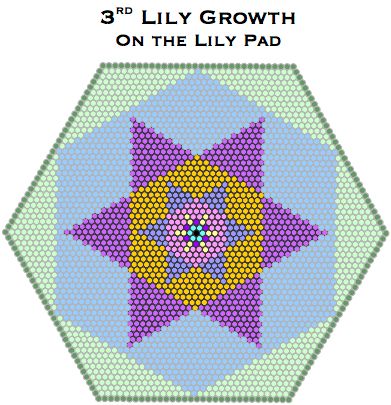 We now have three sequences of hexagon/hexagram pairs within the Lily Pad, all of which are outlined below in dark green, white and black. I call this triple-inscribed hexagon the Template. 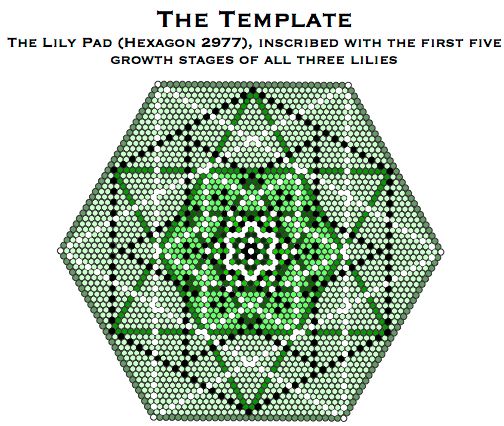 One could see the three hexagram/hexagon sequences as three 'phenotyes' of a water lily, each grown from a single 'seed'. This gives a total of fourteen Star of Davids within the bounds of hexagon 2977:

From this template can be cut a variety of figures from G-triangle geometry, all symbolising the Lord both through their genetic links to the Star of David and through the number of counters composing them. Here is an example to whet the reader's appetite.

The standard value of 'Jesus Christ' is 925, which is the number of counters in this beautiful star hexagram within the template. Christ is the Star of David, of course, so we have an elegant example of a figure that symbolises him through the number of units comprising the figure and through its form. I've also shown a biblical title for Christ (Hebrews 7.25, NIV '84), with the same gematria. 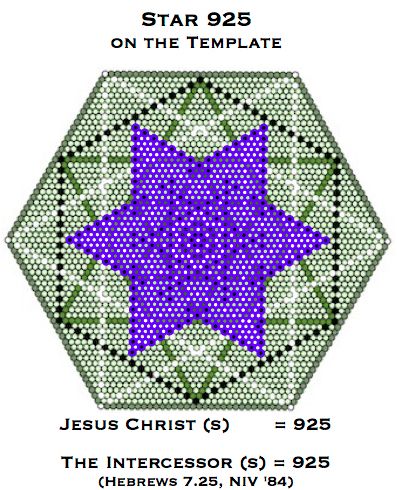 The next page should convince the reader that the Water Lily really is the geometric template for the Trinity.

But first I want to show you something purely aesthetic.

The Star of David is only vaguely floral, with far fewer 'petals' than a water lily. However, if we add appropriate touches of colour to the stars and hexagrams on the Template we obtain a lovely figure that really does look like a water lily flower, from the large number of radiating petals to the stamen rising from the centre. 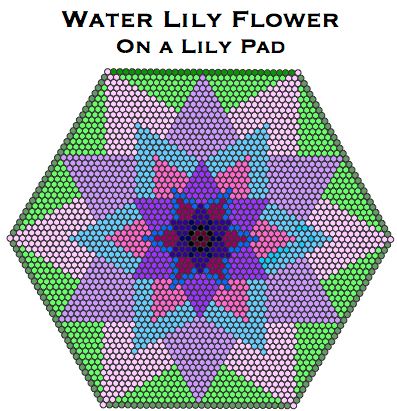 The simplest possible way of 'growing' a hexagram/hexagon pair creates an expanding fractal image of the Star of David, self-similar at different scales, which doubles in side length with every iteration. The first five iterations produce hexagon 2977 with hexagram/hexagon pairs nested inside. When we superimpose a second and third way of growing the Star of David on this hexagon, based on star hexagrams/star hexagons, we create a stunning image of a water lily on a lily pad. The similarity extends to the way the figure grows geometrically, which imitates plants like the water lily in their vegetative stage.

The entire figure, with its internal structure shown in outline, is a template for the creation of symmetrical figures of the type already prevalent in the New Bible Code: hexagons, hexagrams, snowflakes, trefoils, triangles and similar figures, all related to the Trinity through gematria and symbolism. An example is star hexagram 925, already outlined in the Template, 925 being the standard value of 'Jesus Christ'.

The next page introduces more cuttings from the template, with which I will populate the lily pond.

1. In growing the lily I was guided by the visual metaphor for the 6+1 day Creation week which had already given me the Creation Snowflake. The hexagon has to completely surround the hexagram. So after hexagram 1 the next member is hexagon 7; otherwise the sequence couldn't continue.