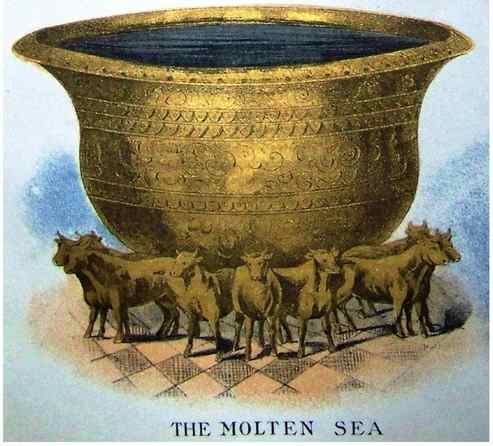 In 1 Kings 7 the Sea (called the Molten Sea in some other versions) is described. This is a much larger version of the laver holding water for the priests to ritually cleanse themselves, made by Solomon for the first temple in Jerusalem.

He made the Sea of cast metal, circular in shape, measuring ten cubits from rim to rim and five cubits high. It took a line of thirty cubits to measure round it. Below the rim, gourds encircled it - ten to a cubit. The gourds were cast in two rows in one piece with the Sea. The Sea stood on twelve bulls, three facing north, three facing west, three facing south and three facing east. The Sea rested on top of them, and their hindquarters were towards the centre. 1 Kings 7.23-25 (NIV)

The main design features of the Sea are shown illustration above. In particular, it shows the twelve bulls supporting it and facing out from the centre and the double row of gourds around its girth. There is a crude estimation of pi here too (which has given rise to much discussion) in the ratio of the circumference to the diameter of the Sea. [1]

I found a remarkable figure encoded within the prologue of Genesis that depicts the Sea as built by Solomon in every respect. It is based on the regular dodecagon, which is introduced below.

The regular dodecagon is of course a twelve-sided polygon and it gives rise to a family of internal figures - four dodecagrams and a digon compound - formed by taking twelve evenly-spaced points around a circle and connecting each point not with the one next to it, as with a dodecagon, but with progressively more remote points around its circumference. 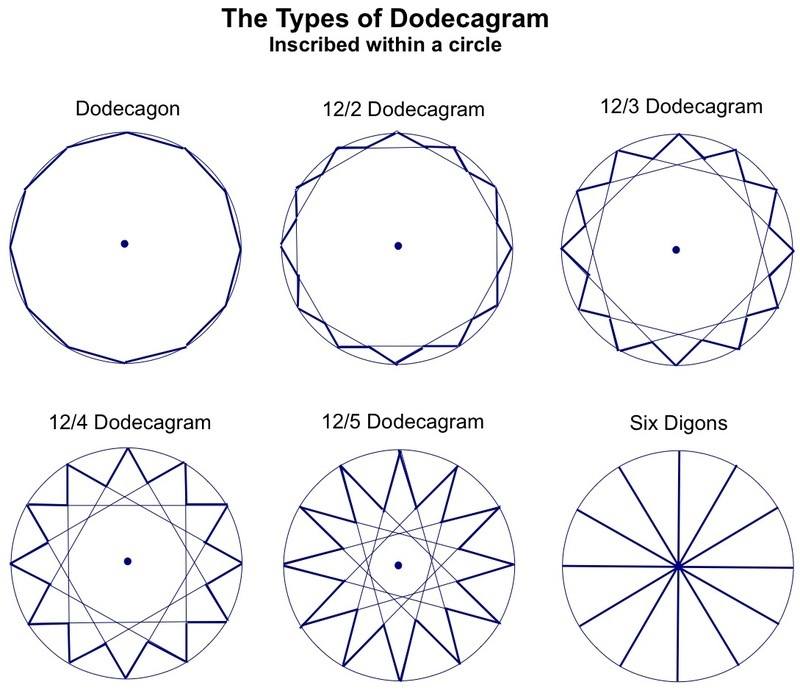 All of these figures can be represented in numerical geometry and each give rise to a sequence of numbers. The centred dodecagon sequence, for instance, runs as follows: 1, 13, 37, 73, 121, 181, 253, 337 . . . . This is identical to the hexagram numbers. The figure of interest here is dodecagon 3601, the 25th member of the sequence, and it will become clear that the figure encoded within the Genesis Watermark is this dodecagon and not the equivalent hexagram, because encoded along with it are the 12/3 dodecagram, 12/5 dodecagram and digon which fit perfectly inside this dodecagon. In fact it could be considered to be their parent figure. Its 12/3 dodecagram offspring has 2929 counters, the 12/5 dodecagram has 1873 counters and the digon compound has 289 counters. These figures combine to create a spectacularly beautiful depiction of the Sea and the twelve oxen supporting it.

The Sea is encoded within the Genesis Watermark as a cluster of numbers. These construct the figure shown. 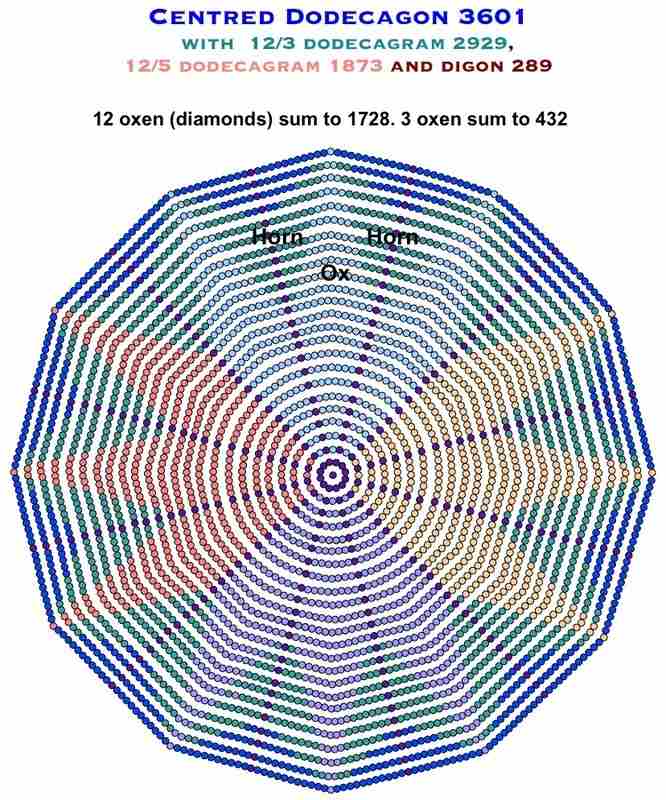 I have coloured the oxen so that they are divided into four groups of three, facing in the four compass directions. The digon compound forming the horns of the oxen can only be oriented in the way shown, so its placing is not arbitrary. Each ox faces outwards, as with the original Sea.

The dodecagon is not a circle of course, as was the Sea it represents, but it is a close approximation and the number twelve is part of the verse describing the Sea as the number of oxen supporting it (it also symbolises perfect government in biblical numerics). The figure can be redrawn anyway, so that each ring of units is circular and the circular figure and its internal structure would be almost identical to the dodecagon.

One further detail from the verse is the double ring of gourds, which resemble counters, of which there were thirty around the Sea in each ring.

Below the rim, gourds encircled it - ten to a cubit. The gourds were cast in two rows in one piece with the Sea. 1 Kings 7.24

The total number of gourds in each ring encircling the Sea is therefore 300, and this is the number of counters in the next dodecagonal ring which would surround dodecagon 3601 to create dodecagon 3901, just as the rim of the Sea surrounds the water. These details leave us wondering if perhaps the builders or writers of 1 Kings were aware of the dodecagon and its structure. That may be the case, but it does not explain why this magnificent figure should be suggested within the modern NIV Bible.

The Sea within the Genesis Watermark

All of the numbers describing the above figure and its internal structure are encoded within the first five verses of the NIV Bible (1984). All are in close proximity to each other and the main structural numbers appear in strings, proceeding from the beginning of the Bible or close to it, which is much more improbable than finding them further into the Bible. The standard value of 'The Sea' (319) is also encoded, proceeding from the same word as the dodecagon of 3601 units representing the Sea itself.

1. Vernon Jenkins has shown that the rim around the Sea is of sufficient thickness to produce a much more accurate estimation of pi if the external diameter of the Sea is used for the calculation. See issue 3 of the Second Edge monographs: http://www.whatabeginning.com/